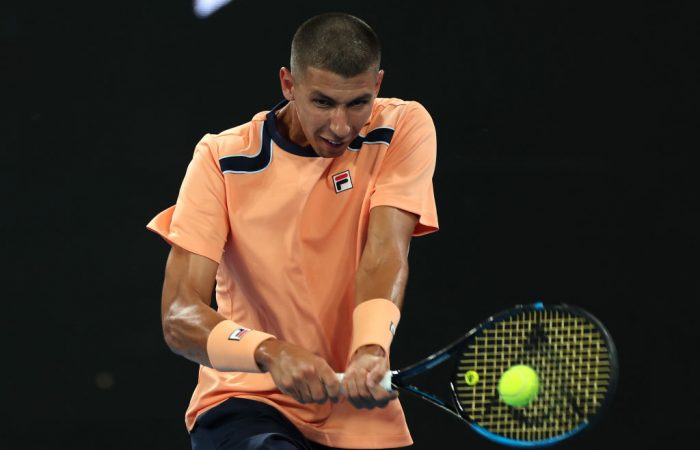 Aussie Alexei Popyrin has continued the impressive runs of local wildcards at Australian Open 2023, winning a four-hour battle in the opening round.

Alexei Popyrin’s earliest Australian Open memory is watching in awe from the stands as Lleyton Hewitt played Marcos Baghdatis in a late-night battle. The then seven-year-old dreamed of one day emulating his heroes.

Their gruelling four-hour and 26-minute encounter, the longest of Popyrin’s career, finished at 2.02am local time.

“I’m exhausted. That was a physical battle and a mental battle too,” an emotional Popyrin said.

The 23-year-old wildcard was staring down a two-set deficit, but bravely saved four set points in the 10th game of the second set and went on to level the match at one-set apiece.

Popping back into it 👌@AlexeiPopyrin99 is PUMPED after securing the second set tie-break, 7-6(5) #GoAussies • #AO2023 pic.twitter.com/5e0PzlMOW4

There was only a single break of serve across the first four sets, secured by world No.115 Tseng in the opening set.

Popyrin kept persevering and finally, on his 13th opportunity, he earned his first break early in the deciding set and built a 3-0 lead.

With both players beginning to feel the physical affects of their gruelling encounter, the spirited Popyrin took control to serve out a memorable victory.

He finished the match with 31 aces and 89 winners in total.

A late night finish but Alexei Popyrin gets it done in five-sets.

But unfortunately, Chris O’Connell and Jordan Thompson both lost their opening-round matches in four sets.