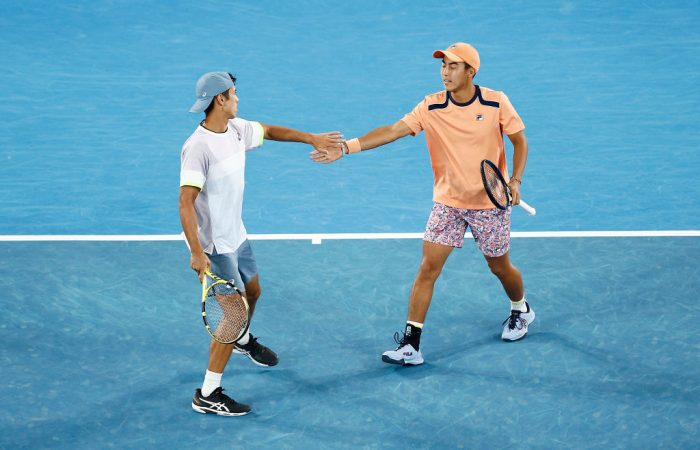 Jason Kubler and Rinky Hijikata are lighting up Melbourne Park with their amazing run in the Australian Open 2023 men’s doubles competition.

The Aussie wildcards knocked out the sixth seeds in the second round, then fought back from match point down to clinch a remarkable third-round victory.

Remarkably, Kubler, who is currently ranked No.163 in doubles, and Hijikata, the world No.277, are teaming up for the first time.

Kubler and Hijikata are among 22 Aussie players scheduled to compete on day 10 at Melbourne Park.

[14] John Peers (AUS)/Andreas Mies (GER) v [8] Marcel Granollers (ESP)/Horacio Zeballos (ARG)
Men’s doubles, quarterfinals, Kia Arena, first match (from 1pm AEDT)
Peers has advanced to his fourth Australian Open doubles quarterfinal. The 34-year-old, who grew up in Melbourne, is now hoping to reach his third semifinal and first since 2019. The world No.38 and Mies, a 32-year-old German ranked No.22, are playing just their second tournament together, but are proving a formidable team. They face world No.16 Granollers and world No.14 Zeballos, who are aiming to reach back-to-back Australian Opens semifinals.

[4] Storm Hunter (AUS)/Elise Mertens (BEL) v Marta Kostyuk (UKR)/Elena-Gabriela Ruse (ROU)
Women’s doubles, quarterfinals, Margaret Court Arena, second match (not before 1pm AEDT)
Hunter, a 28-year-old who lives in Melbourne, is thriving in a new partnership with world No.5 Mertens, a 27-year-old from Belgium. The fourth seeds have been building impressive momentum and now face world No.38 Kostyuk, a 20-year-old Ukrainian, and world No.89 Ruse, a 25-year-old Romanian. World No.12 Hunter is contesting her second Australian Open women’s doubles quarterfinal and aiming to reach a first semifinal.