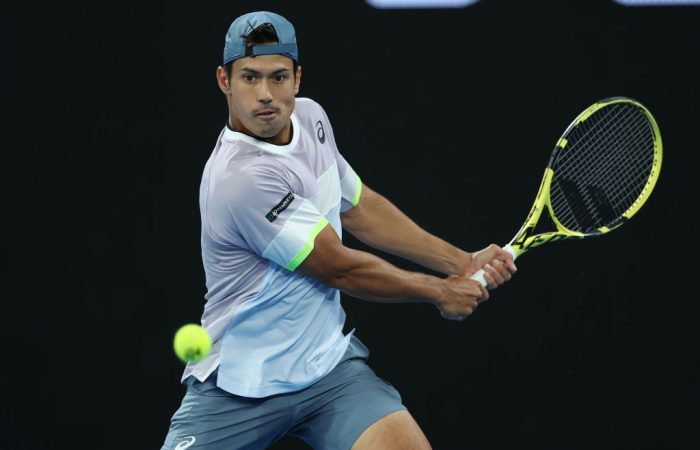 Jason Kubler has amassed some impressive firsts already this season.

The 29-year-old Australian currently sits at a career-high ranking of world No.84, scored back-to-back top-40 wins for the first time during the United Cup, and recorded his maiden Australian Open main-draw win earlier this week.

Kubler was hoping to add a first top-20 win at a Grand Slam tournament to his growing list of achievements tonight, but big-hitting Karen Khachanov had other plans.

The 18th-seeded Khachanov recorded a 6-4 5-7 6-4 6-2 victory in their second-round clash at Melbourne Park, striking 15 aces and 57 winners in the two-hour and 53-minute encounter.

A gallant Kubler showed plenty of the grit that has endeared him to fans across an outstanding Australian summer, especially when staring down a two-sets-to-love deficit.

Khachanov served for the second set, but was broken when Kubler won a mind-boggling 70-shot rally with a net-cord winner.

That point proved a major momentum changer, as Kubler reeled off four consecutive games to level the match.

But despite Kubler’s best efforts, the US Open 2022 semifinalist proved too strong in the end and closed out a four-set victory.

This matches Khachanov’s career-best result at Melbourne Park and is the fifth consecutive year the world No.20 has reached the Australian Open third round.

Khachanov now faces 16th-seeded American Frances Tiafoe for a place in the fourth round.

Thanasi Kokkinakis has been the sole Australian winner so far on a rain-interrupted day three, with the 26-year-old scoring a comprehensive first-round win over former world No.9 Fabio Fognini.