Gators Dominant Against USF on Sunday 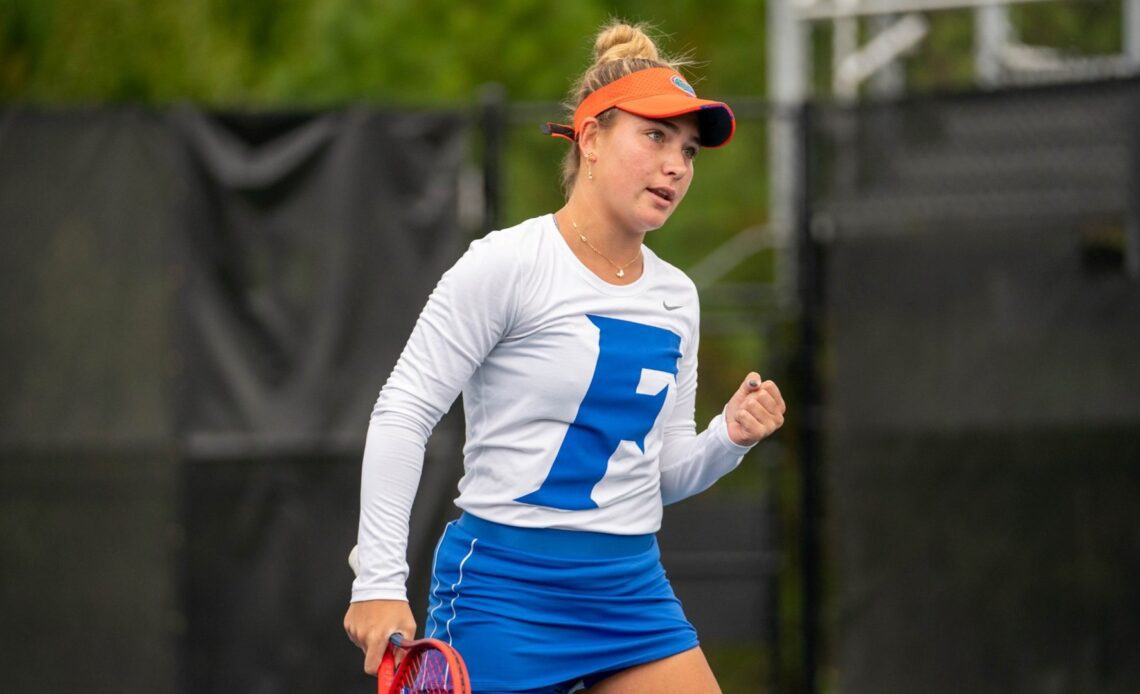 On the top court, Alicia Dudeney and Carly Briggs pulled-away from Grace Schumacher and Margriet Timmermans for a 6-3 victory and the important doubles point.

In singles competition, the Gators were focused as well, picking up five of six singles victories. On the top court, Briggs completed a perfect day with a strong 6-1, 6-2 performance over Grace Schumacher, while Shelton took care of business on court six, downing Timmermans in straight-set, 6-3, 6-1.


Leading the match as a team, 3-1, all eyes went to court two where Dudeney was matched-up with Laura Pellicer. The United Kingdom native defeated Pellicer in a strong 6-1, 6-3 effort to clinch the match for the Orange & Blue.

The Gators weren’t done with the victories, however, as freshman Rachel Gailis earned her first-career dual match triumph at four singles, defeating Cliona Walsh. Gailis found herself in a battle early, holding on for a 7-5 opening-set win, before running away with a 6-1 second set. Also earning her first dual match victory was Emily De Oliveira on court five. The sophomore quickly found herself down a set to Marta Falceto, but bounced-back with a hard-earned 7-5 second set. She remained composed in the 10-point tiebreaker for the match, claiming a 10-4 victory.

Up Next
Florida’s focus will now turn to ITA Kickoff Weekend where they’ll meet Arizona in the opening round in College Station, Texas. The match is scheduled for Saturday, Jan. 28, at 2 p.m. ET.

Quotes from the Court
Head Coach Roland Thornqvist
On Sunday’s competition…
“I’m really pleased with our effort today and we were excellent in doubles. This team has a chance to really excel in doubles and today we were clinical. Our veteran players, overall, did a really good job helping our youngsters throughout the day by being positive and encouraging while helping us play tough. We had to problem-solve on a few courts and it was just a great opening round for the Gators against a tough South Florida team.”

On Emily De Oliveira’s comeback…
“She could…