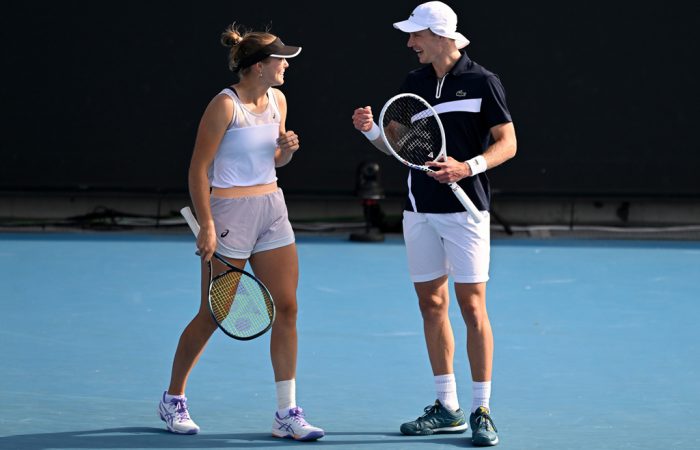 First-time partners Olivia Gadecki and Marc Polmans are combining superbly at their home major, with the Australias advancing to the quarterfinals of AO 2023.

Olivia Gadecki and Marc Polmans were yet to meet ahead of Australian Open 2023 – but the first-time partners have quickly made up for any lost time, having secured their path into the quarterfinals of the mixed doubles event.

Following a straight-sets victory on Saturday over No.4 seeds Ena Shibahara and Wesley Koolhof in the opening round, Gadecki and Polmans secured an even more comprehensive victory over fellow Australians Kimberly Birrell and Rinky Hijikata.

They required less than an hour to secure a 6-0 6-2 victory.

“It’s been pretty natural,” beamed Gadecki in the pair’s post-match interview. “I only met Marc at the star of the tournament, so I think so far we’re doing pretty well.”

For Polmans, the new partnership was an easy decision, with the Victorian keenly aware of his partner’s immense talent.

“I’ve known of Olivia before – she’s playing really good tennis,” he commented. “I follow the tennis closely, so I’ve already known of her for many years but I’m really happy to be playing out here with her.”

The obvious enjoyment is translating into near-flawless tennis.

Combining superbly from the outside of their early evening Kia Arena contest with Birrell and Hijikata, Gadecki and Polmans achieved the perfect beginning as they claimed the opening set without the loss of a game in just 20 minutes.

There were signs of a challenge as Hijikata served to claim the opening game of the second set. But winning four games straight, Gadecki and Polmans soon reasserted authority.

Birrell and Hijikata claimed just one more game as Gadecki and Polmans secured their quarterfinal progress.

“It was good fun to come out here with Olivia today, playing against two good mates in Kim and Rinky,” said Polmans, who spent much of 2022 sidelined with an ankle injury.

“We’re really happy we got the win, but it was a lot of fun as well.”

Gadecki and Polmans, from Queensland and Victoria respectively, will take on another all-Australian duo, Maddison Inglis and Jason Kubler, in the quarterfinals.

And while Gadecki admits that “it’s never fun to play another Aussie”, the 20-year-old is excited to…