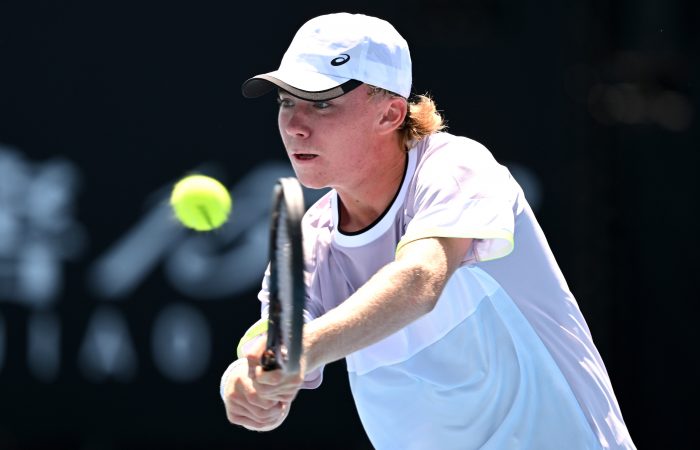 Hayden Jones, Australia’s top-ranked junior boy, is one of seven Aussies to reach the second round in the Australian Open 2023 boys’ doubles competition.

Hayden Jones is relishing the family support as he experiences his second Australian Open juniors campaign.

The 16-year-old Queenslander is joined this year by his younger sister Emerson, who is contesting the Australian Open girls’ singles and doubles tournaments.

The extended family is in tow, providing a fantastic experience for the siblings.

“It is so great to have our whole family in one place. Last year we were in a lot of different places most of the year, but to have us both here and with the family is really good,” said Hayden, who exited in the first round of the boys’ singles tournament.

On day eight at Australian Open 2023, Hayden combined with Russia’s Danil Panarin for a 6-2 6-2 win over fellow Australian Brendan Loh and Japan’s Yuta Tomida in the boys’ doubles.

“It was good to play against Brendan,” said Jones. “I hit with him the other day and he wasn’t supposed to be playing. Our original opponents pulled out, so he got the chance. That was nice.”

Jones reflected on the overwhelming crowd support that he and his sister have felt this week, in what they hope is the first of many Grand Slam experiences they’ll share.

“The crowd was so good yesterday when I was trying to get back into my singles match. It shows me what it’s like for Aussies who play here to have that crowd behind you,” he said.

“I know Emerson felt the same in her matches, it’s really an awesome feeling.”

It was a positive day for the Australians in the boy’s doubles, with Pavle Marinkov and Zachary Viiala combining to outlast their Czech opponents Jakub Filip and Maxim Mrva 6-1 3-6 [10-8].

For Marinkov, the win came 24 hours after he claimed his opening boys’ singles match at Melbourne Park.

Cooper Errey and Marcus Schoeman also progressed in the boys’ doubles, the Australian pair teaming to eliminate the No.4 seeds in a come-from-behind victory.

Errey, from Victoria, and Schoeman, a Queenslander, fought back after dropping the first set, eventually overcoming Matej Dodig and Mihai Coman 4-6 6-3 [10-8].