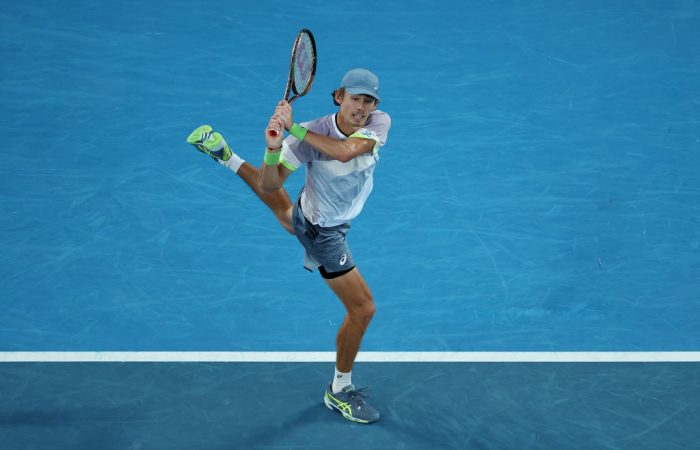 Alex de Minaur has bowed out in the fourth round of the Australian Open 2023 men’s singles competition.

Their highly anticipated fourth-round showdown at Rod Laver Arena this evening proved a one-sided contest, with Djokovic sweeping to a 6-2 6-1 6-2 victory against the shell-shocked Aussie.

“What I experienced today was probably Novak very close to his best, I would say,” De Minaur conceded.

The nine-time Australian Open champion was simply sublime, striking 26 winners to nine in the two-hour and six-minute encounter.

Djokovic was also impenetrable on serve throughout the match, not facing a break point and conceding just 16 points across his service games.

De Minaur, the last remaining Australian in the singles competition, made an encouraging start. But from two-all in the opening set, Djokovic won nine consecutive games to race to a 6-2 5-0 lead.

World No.24 De Minaur kept fighting, but had no answers against the relentless pressure.

“He was what felt like on another level to mine,” De Minaur said. “I was just trying to hang on there. At the start was very solid, then he loosened up even more and started swinging. It felt like he could hit winners from every place in the court. (I) didn’t really know what to do out there.”

De Minaur eventually succumbed to the worst Grand Slam defeat, in terms of total games won, in his career.

This result propels Djokovic into his 13th career Australian Open quarterfinal and extends his active winning streak at the tournament to 25 matches.

De Minaur had been aiming to become only the seventh Australian in the past 40 years to advance to an Australian Open men’s singles quarterfinal and the first to reach that stage in eight years.

Although that quest fell short, the 23-year-old Australian can still take positives from his performance this tournament.

De Minaur matched his career-best result at his home Grand Slam and made back-to-back fourth rounds, a feat only achieved by two other Australian men, Lleyton Hewitt and Bernard Tomic, in the past two decades.

“I’m happy with the summer I’ve had, but really I want to do better than fourth round at a Slam,” De Minaur…