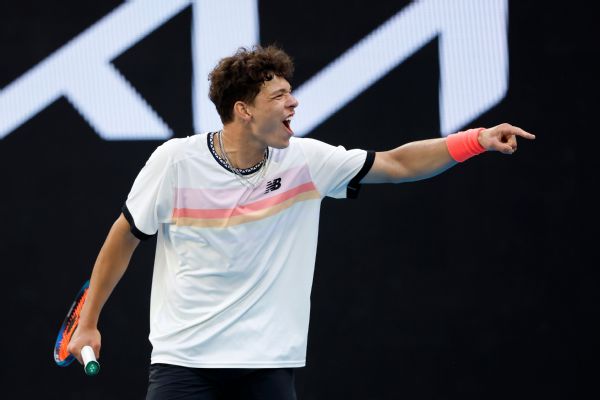 MELBOURNE, Australia — The next stop on Ben Shelton’s first trip outside the United States will be a spot in the Australian Open quarterfinals.

Shelton is playing in only his second Grand Slam tournament — and using his passport for the first time — and he credited himself with being “energetic” and “courageous” across the more than 3 1/2 hours he and Wolf traded big cuts and momentum shifts on a day where the temperature rose above 80 degrees Fahrenheit (25 degrees Celsius).

They join Sebastian Korda — his dad won the 1998 Australian Open — to give the U.S. three men in the quarterfinals in Melbourne for the first time since 2000. Back then, the trio was Andre Agassi, Pete Sampras and Chris Woodruff.

Shelton, Paul and Korda are all in the final eight at a major for the first time. Not the case, of course, for Novak Djokovic, the 21-time Grand Slam champion who looked indomitable during a 6-2, 6-1, 6-2 win over No. 22 seed Alex de Minaur of Australia and declared that his bothersome left hamstring is no longer an issue.

“I didn’t feel anything today,” Djokovic said, noting that he has been taking “a lot of” anti-inflammatory pills.

Djokovic, who couldn’t play in last year’s Australian Open because he wasn’t vaccinated against COVID-19, moved a step closer to a record-extending 10th championship in Melbourne by never facing a break point and by claiming a half-dozen of de Minaur’s service games.

Rublev won it when his backhand return slipped off the net cord and barely, just barely, made it over onto Rune’s side of the court, impossible to reach. Rublev dropped to his back at the baseline and raised both arms as if to say, “Sorry!” — or…