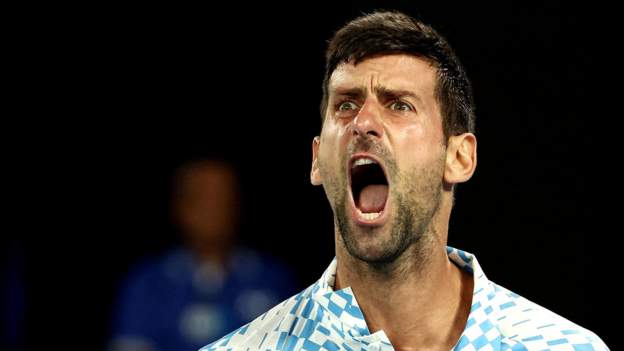 Serbia’s Djokovic, 35, cut a frustrated figure at times but channelled his emotions into a ruthless 6-1 6-2 6-4 win over Russia’s Rublev in Melbourne.

The fourth seed, who again had his left thigh strapped, will play American Tommy Paul in the last four on Friday.

Former world number one Djokovic, who was the only major champion in the men’s quarter-finals, is favourite for the title as he chases a record-equalling 22nd Grand Slam.

“I could not be happier with my tennis. I’m playing solidly from the back of the court and love these conditions,” said Djokovic, who has not been practising on the days between matches.

“I’m going to keep going. I think it’s important to be smart and wise with the body in these circumstances where it’s more important to recover and get ready for the next challenge.”

Djokovic races through another win

Djokovic looked close to his best in a dominant win over Alex de Minaur in the fourth round, but the way he demolished an opponent of higher pedigree in Rublev was even more impressive.

Much of the talk has centred around the scale of Djokovic’s hamstring injury, and racing through another victory – this one in little more than two hours – seems to be the best way to protect the problem.

Rublev has one of the most powerful forehands in the game, but was dispirited by Djokovic’s precise and incessant returning.

Asked if it was his best performance of the tournament, Djokovic said: “I would rank it as number two but it is very close to the performance of two nights ago [against De Minaur].

“Overall, the scoreline in the first two sets doesn’t tell the truth of the close games we had.

“If I have to sum it up, in all the important moments I played the…