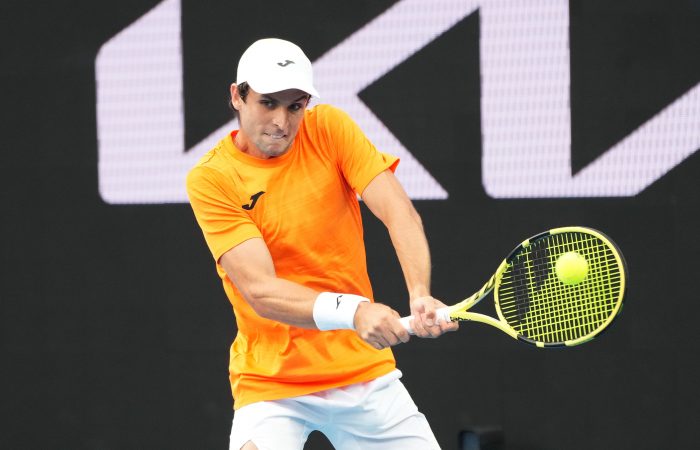 Australian hope Aleksandar Vukic is through to the final round in the Australian Open 2023 men’s qualifying singles competition.

Aleksandar Vukic has secured his spot in the final round of the Australian Open 2023 qualifying competition.

The 26-year-old Australian continued his impressive march through the draw, recording a 7-6(3) 6-3 victory against Argentina’s Thiago Agustin Tirante in second-round qualifying action today at Melbourne Park.

Vukic is yet to drop a set this week and was relieved to survive a spirited challenge from 21-year-old Tirante, a former world No.1-ranked junior.

“I played good enough to win,” said the No.21 seed, who hit eight aces and 22 winners in the 90-minute encounter.

“It was very tricky conditions compared to our last matches. I think we both struggled to find rhythm early on.

“It was very lively and for the first six or seven games it was tough to control. But once we got into the match, it was a very good fight.

“These sort of matches are always confidence building, so we’ll keep going.”

Aleksandar Vukic has a third consecutive #AusOpen main draw in his sights!

This is the second time that Vukic has made in the final round in Australian Open qualifying, matching his 2020 result.

The Sydney-based athlete is looking to make a third consecutive main-draw appearance, after receiving wildcards in 2021 and 2022.

Admitting it would mean “so much” to qualify, Vukic is determined to approach tomorrow’s final round as “just another tennis match”.

Tickets to attend Australian Open qualifying, which concludes tomorrow, are just $5 for kids and $10 for adults. Fans will also be able to see some of the world’s top-ranked players compete in practice matches at Melbourne Park.