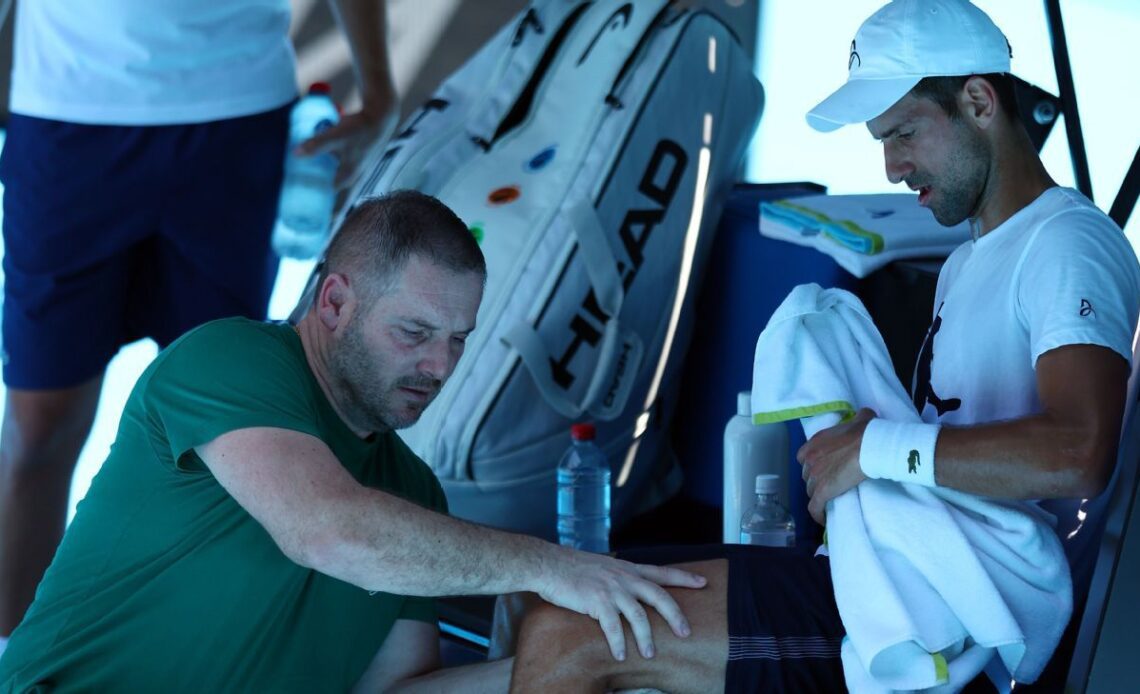 MELBOURNE, Australia — Novak Djokovic‘s hamstring injury scare continues to hover over his Australian Open tilt after the nine-time champion required treatment on his left leg throughout an exhibition practice match against Daniil Medvedev.

He has won 34 consecutive matches in Australia, with his last defeat a shock fourth-round loss to Korean Hyeon Chung in at the 2018 Australian Open.

But his return to Australia hasn’t all gone smoothly.

Djokovic tweaked his left hamstring in the semi-final in South Australia when also playing Medvedev and required a medical time-out, but recovered to win that game, then the final.

After beating Sebastian Korda in Sunday’s decider the 35-year-old revealed he’d worked “deep into the night” with his physio after the semi-final and to shake off the niggle in time for the following day’s final.

“It was all right,” Djokovic said, noting he was confident it wouldn’t affect him at the Open.

“There were a few times in the match I felt was tightening up, the muscle, but nothing that would worry me for my performance.”

But in Wednesday’s practice match with Medvedev at Rod Laver Arena, the first time Djokovic had played in front of the Melbourne public since last year’s deportation saga, the injury appeared to again rear its head.

The session was meant to be 75 minutes but Djokovic exited after Medvedev claimed the first set 6-4 in 36 minutes.

He broke the Russian former world No. 1 in the opening game but, when leading 3-2, received treatment, with a member of his team completing some knee extensions.

Knee extensions can be used to release the hamstring.

He only won one more game from that point.

Medvedev won the next two games and Djokovic again received the same treatment at the break when trailing 4-3 and again at 5-4, before pulling the pin when the Russian triumphed a game later.

Spanish veteran Pablo Andujar stepped in for the star Serb as Medvedev remained on court.

Djokovic is meant to play Nick Kyrgios in another exhibition match on Friday night.

The friendly practice match set was played in jovial spirits between Medvedev and Djokovic in front of a small, polite crowd of spectators who paid $20 each for the new chance.

Djokovic, who refused to receive COVID-19…