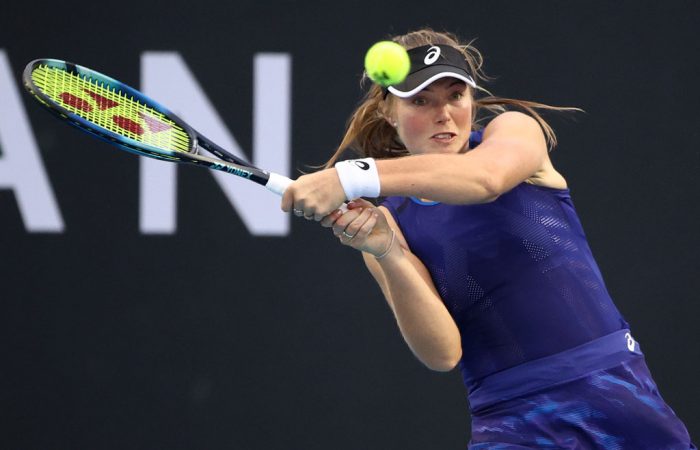 With AO 2022 champion Ash Barty as her mentor and a win over a recent champion under her belt, Olivia Gadecki brings many positives into her Australian Open campaign.

Olivia Gadecki has had a big start to 2023, and it is about to get even bigger for the Queenslander.

The 20-year-old, recently granted a wildcard into the Australian Open main draw, will be mentored at Melbourne Park by a player whose impact at the famous grounds 12 months ago still reverberates.

“I’ve been really fortunate to always be able to contact her if I have any questions or if I need advice, she has always been there for me,” Gadecki told AAP.

“The best part is she just treats me like a normal person, and we can relate in that regard and off court is just as important as on court.”

Gadecki, who is based in Barty’s home state of Queensland, will be competing in her first Australian Open main draw and first career major when the event kicks off on Monday.

She enjoyed a breakout 2022 season, nudging into the world’s top 200 after reaching three consecutive Australian Pro Tour finals in March and April.

She went 19-5 to start the year, before coming home strong to win 10 of her last 14 matches on clay and hard courts towards the back end of the season.

The then-teenager rose to prominence in February 2021, when she defeated top-10 ranked and Australian Open 2020 champion Sofia Kenin in the Melbourne Summer Series. The victory elevated Gadecki nearly 350 places in the rankings.

Ranked world No.988 leading into the match, it was the biggest ranking differential where a top-10 player has lost in the past 15 years.

Gadecki spoke with maturity after that win, referencing it as a stepping stone towards where she would love to be.

“This win means that I’m not far, and I can really do this,” she said at the time. “I feel like I can really make this dream of mine a reality.”

That level head has proved critical to Gadecki’s development as she climbed the rankings.

“Yeah, I honestly just thought about the process and trusted that I could do this, and I just took one point at a time and really believed in my shots and my…