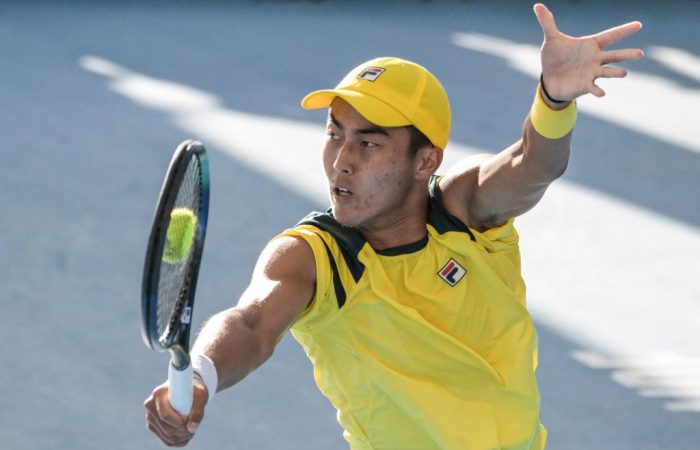 Already making a name for himself as a big-match player, Rinky Hijikata appreciates a big opportunity as he makes his Australian Open main-draw debut.

Many interested eyes will be on Australia’s Rinky Hijikata as he makes his main-draw debut at Australian Open 2023.

The 21-year-old from New South Wales is appearing in back-to-back Grand Slam main draws, having famously taken a set off Rafael Nadal at last year’s US Open on his debut at that level.

Hijikata’s reputation as a player for the big occasion was only enhanced at last week’s Adelaide International, where he pushed Canada’s Denis Shapovalov to three hard-fought sets.

The Aussie dropped only four points on serve in the first set of that match, and his ranking of world No.164 looks destined to rise.

In claiming a breakthrough ATP Challenger title at Playford last October, he became the youngest Aussie male to win an event at that level since Alexei Popyrin in 2018.

A two-time winner of the Male Junior Athlete of the Year at the Australian Tennis Awards, Hijikata has won six ITF titles in the past 18 months and faced two top-five players in the past six months.

“It’s not often you get to play a player of that calibre,” Hijikata noted after his US Open clash with Nadal, which followed a meeting with then-world No.1 Daniil Medvedev at Los Cabos in August.

“It’s always been a dream of mine to go out there on the biggest stages of tennis and try to have a big crack at players like that. I’m excited for those challenges.

“That was probably one of the biggest matches I’ve ever played.

“That was a great experience for me, I think I learned a lot from that. The atmosphere and everything was a bit different than anything I’ve ever played in.

“I guess all the good players have a bit of an aura around them maybe and once you step out on-court, you don’t really know what to expect the first time.”

In summarising his past 12 months, Hijikata explained how he is learning to understand the ups and downs of professional sport.