Djokovic Calls Out “Drunk Out of His Mind” Waldo Fan 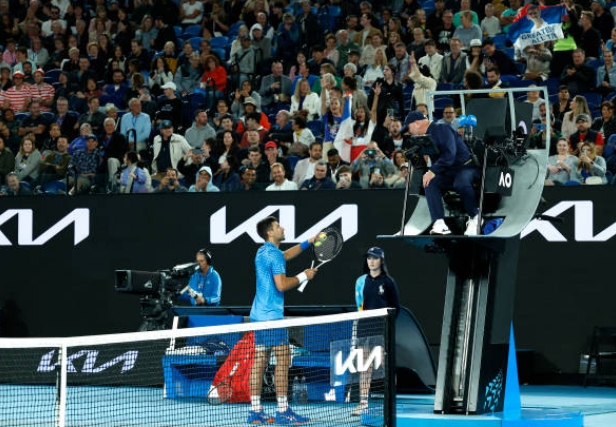 A group of fans dressed as the famed Where’s Waldo character (called Where’s Wally Down Under) in matching red-and-white striped shirts and matching beanies were busy giving Djokovic the business during his Australian Open second-round win over Enzo Couacaud.

Nine-time Australian Open champion Djokovic was coping with a cranky left hamstring injury, a tricky French qualifier on the opposite side of the net and a few unruly fans who sometimes screamed before or during his serve motion.

Heckled by the Where’s Wally gang he claimed was inebriated, Djokovic called out the colorful crew to the chair umpire.

A furious Novak Djokovic pleads with the umpire to remove a loud spectator from the audience 😤#AusOpen | @DjokerNole pic.twitter.com/IiASc4pyEj

“The guy’s drunk out of his mind, from the first point he’s been provoking me,” Djokovic yelled at the umpire in the fourth set. “He’s not here to watch tennis. He just wants to get in my head. What are you going to do about it? Why don’t you get security to get him out of the stadium?”

Later, Djokovic prompted a collective laugh from the crowd saying “Thank you” to another fan who told a different unruly fan to “Shut up!” for trying to distract the 35-year-old Serbian superstar during his service motion.

Afterward, Djokovic said he tolerated the verbal abuse for a while because he understands fans pay for tickets and have a right to voice their views.

Ultimately, Djokovic said both the verbal abuse crossed the line and compelled him to ask the chair umpire to act.

“Most of the people, super majority of the people, is here or some other situations that I had in the past in some other tournaments, is always respectful,” Djokovic said. “They are great fans and pay the ticket to watch you. I respect that. That’s sport. Some people like you more, cheer…