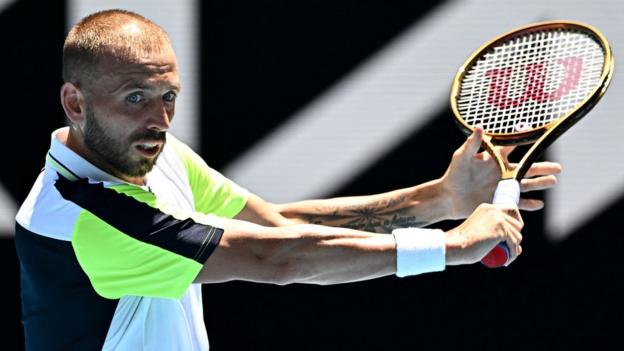 Britain’s Dan Evans was overpowered by Andrey Rublev in the third round of the Australian Open on Saturday.

Russia’s Rublev will face Danish teenager and ninth seed Holger Rune as he bids to reach the Melbourne quarter-finals for the first time.

Evans’ defeat leaves Andy Murray as the only British player left in either singles draw.

“Andrey was too good. He played some good tennis,” said 32-year-old Evans, who was seeded 25th.

“I didn’t feel I did too much wrong. I had a little chance in the first when I had break point, but I didn’t take it.

“He was very aggressive and better than me.”

Evans had won three of his six previous meetings with the 25-year-old Russian, but all of those were three-set matches.

The British number two, who reached the fourth round in Melbourne in 2017, started well against Rublev, creating a break opportunity for a 4-3 lead in the first set.

However, Rublev saved it and broke to close out the set, before upping his aggression to win the next two sets in solid style.

“I’m not stupid, I know it’s three out of five and a very different match to two out of three,” said Evans.

“That also gave me a lot of confidence that he’d have to win three. Obviously it didn’t work out that way.”

Rublev thanked Evans after the match for giving him a banana during a changeover.

“I asked the ball boy, but Danny asked for bananas earlier and he had two so he just said ‘take it’, and I caught it,” Rublev said.

“He helped me with some energy, for sure. I had extra because I ate the banana.”