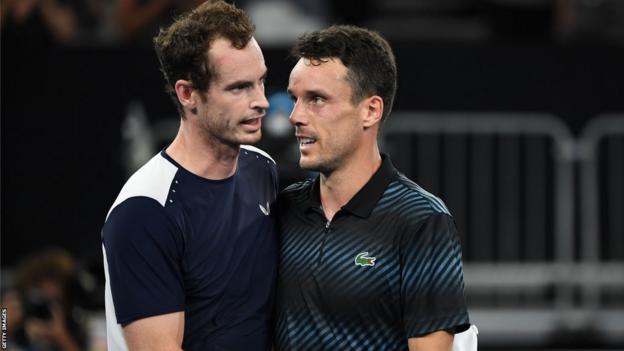 Much has changed for Andy Murray since he last played Roberto Bautista Agut at the Australian Open – and much has stayed the same.

Since then he has gained a metal hip, but as he battled to take a five-set victory against Thanasi Kokkinakis in the early hours of Thursday, it was clear his desperate will to win is unchanged.

The 35-year-old, who also needed five sets to beat Matteo Berrettini in the first round, finished playing at 04:00 Melbourne time and was back at Melbourne Park eight hours later to begin his third-round preparations.

Now ranked 66th in the world, Murray will face 24th seed Bautista Agut for an Australian Open fourth-round place few would have dared to predict back in 2019.

While Murray has spent a total of 10 hours and 34 minutes on court in the first two rounds, fourth seed Novak Djokovic has been out there for five hours and six minutes.

Djokovic, seeking a 10th Australian Open title, continues his bid against Grigor Dimitrov but he has been hampered by a hamstring injury in Melbourne.

The 21-time Grand Slam champion may benefit from the men’s draw opening up in the early stages, with top two seeds Rafael Nadal and Casper Ruud already out.

Britain’s Dan Evans will also be in action on day six, playing fifth seed Andrey Rublev in the third round.

Can Murray’s ‘big heart’ get him through one more?

When Murray lost to Bautista Agut in 2019, he was shown an emotional tribute video and said: “If this was my last match, it was an amazing way to end.”

Having first had hip surgery in 2018, he had a second operation shortly after the 2019 Australian Open and made his singles return towards the end of that year.

On Saturday, Murray has the chance to reach the fourth round of a Grand Slam for the first time since his run to the Wimbledon quarter-finals in 2017.

He and Bautista Agut have met twice since 2019 – both times in 2022 – and the Spaniard won the two meetings in straight sets.

What remains to be seen is…