Kubler and Hijakata: “Hopefully we can just keep riding the momentum” | 26 January, 2023 | All News | News and Features | News and Events 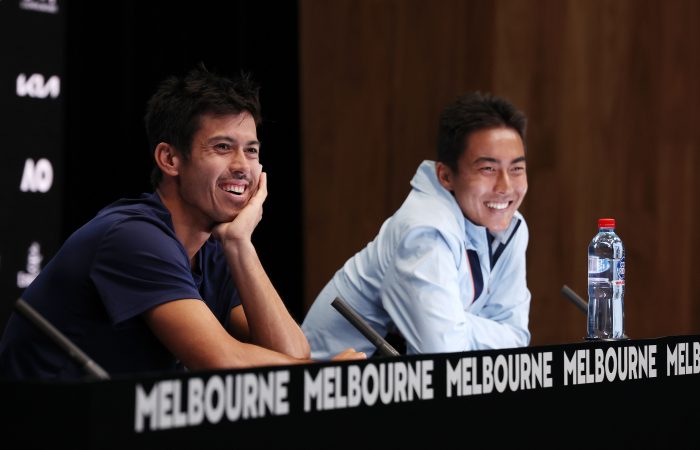 Jason Kubler and Rinky Hijikata are delighted to have advanced to the Australian Open 2023 men’s doubles final.

Jason Kubler and Rinky Hijikata can’t wipe the smiles off their faces after advancing to the Australian Open 2023 men’s doubles final.

The Aussie wildcards were elated this evening as they reflected on their incredible run, which included a straight-sets dismissal of the eighth seeds in today’s semifinal.

World No.163 Kubler and world No.277 Hijikata have now defeated three seeded teams, eliminated seven top 20-ranked opponents and even saved a match point to reach the final.

“It’s super special,” Kubler said. “You know, it’s something we probably weren’t expecting, and then even with the draw we have had in this tournament, it’s been pretty tough. To be able to get through against all these quality opponents is making it even a little bit more sweeter.

“Luckily we get the day off tomorrow so we can sort of, you know, let these wins sink in. Probably enjoy it. Then tomorrow get the focus back on to the doubles and on to the final.”

Kubler and Hijikata will play world No.40 Hugo Nys, a 31-year-old from Monaco, and world No.36 Jan Zielinski, a 26-year-old from Poland, in Saturday night’s final.

“I’m pumped,” beamed Hijikata. “I wouldn’t have picked it at the start of the week. It’s just been so much fun, just getting to play more matches at home, getting to play in front of unbelievable crowds with Kubs, who’s so much fun to play with and obviously is an unbelievably good player, singles or doubles.

“I’m just trying to soak it all in. I just can’t really believe it, to be honest.”

Kubler, a 29-year-old from Brisbane, is only competing in his third Grand Slam doubles draw, while Hijikata, a 21-year-old from Sydney, is contesting his second.

“It’s just been unreal. I feel like I’m so young in terms of tennis, and I just want to keep learning and keep getting better. That’s the main focus for me,” said Hijikata, who made the second round in his Australian Open doubles debut last summer.

“I’m not really worried about anything else at the moment. Just trying to soak it all in, learn as much as I can,…