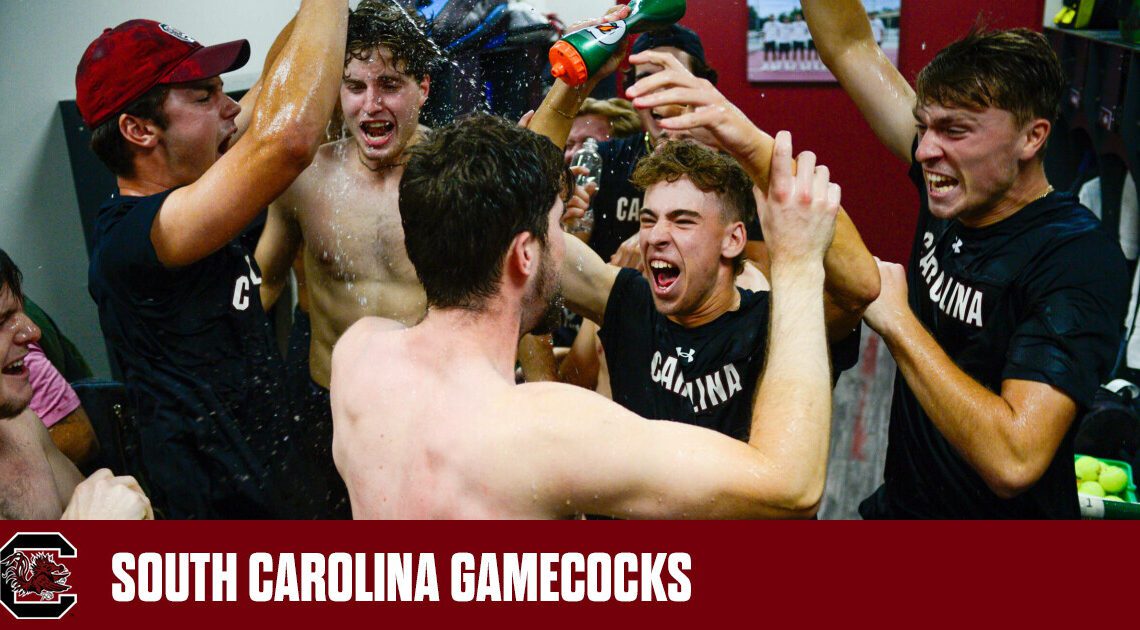 Columbia, S.C. – No. 9 South Carolina men’s tennis earned their first win over the No. 18 North Carolina Tar Heels since 2003 on Sunday. The Gamecocks took the doubles point but fell to 1-3 before storming back to win the match.

Doubles matches were intense with Courts 1 and 3 both evenly trading points. On Court 2, Jake Beasley and James Story got off to a hot start, going up 5-1, but their opponents fought back, taking three straight games to bring the score within one. The Gamecock pair was finally able to get the job done, winning the next game to take their match 6-4.

On Court 3, Raphael Lambling and Casey Hoole were in a tight match, exchanging points until 3-3 when the Gamecock pair won three unanswered games to take the match 6-3, securing what proved to be a critical doubles point for South Carolina.

Play transitioned to singles where the Tar Heels appeared to have the upper hand, winning Courts 5, 6, and 3 to go up 3-1 and be within one point of the match win. Things were tense as North Carolina had already earned first sets at the top two positions in the lineup.

The added pressure was no issue for Story who had already taken his first set 6-3 and was battling back after going down early in the second set. After falling 0-2 in the second, the junior gained some momentum, tying the set up at 3-3 before suffering another break and falling to 4-5. Story then righted his ship, earning back-to-back breaks to take the second set 7-5.

The overall match win was still in grasping distance for the Tar Heels who were now leading 3-2, but the upper-classmen experience and grit of juniors Toby Samuel and Connor Thomson had a response.

Samuel had a rough start to his match, giving up his first set 2-6 and going down 0-3 in the second set. The 15th ranked Gamecock managed to turn the corner to tie the set up a 4-4, but immediately gave up a break point to go back down 4-5. Samuel then responded with a break of his own and won his next service game to take his first lead of the set. With his opponent Brian Cernoch serving, Samuel gave it his all to win the game and even the match with a 7-5 second set.

The Court 1 match went to a third set that proved to be just as intense as the one previous. Samuel took the first game then gave up a break on his next serve to go down 1-3 early. The junior then restored his balance, taking a break point from Cernoch to go up 4-3. The Tar Heel served his way back up to 4-4, but Samuel had a perfectly timed break to…