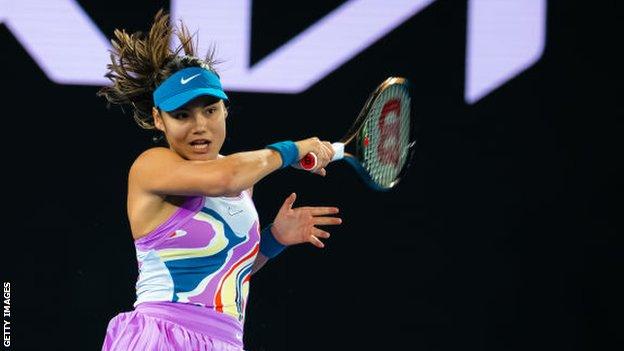 British number one Emma Raducanu is out of the Australian Open after losing in straight sets to Coco Gauff in a gripping second-round match.

Raducanu, ranked 77th in the world, acquitted herself very well against the American seventh seed but a lack of matches told in a 6-3 7-6 (7-4) defeat.

The 20-year-old had battled an ankle injury before the Melbourne major.

Andy Murray and Dan Evans could join Norrie in the third round when they play on Thursday, but Raducanu’s exit means there is no British interest left in the women’s singles.

Raducanu has not reached the third round of a Grand Slam since her stunning 2021 US Open win.

Had she been able to take one of two set points at 5-4 in the second – which would have forced a deciding set – it might have led to a different outcome.

“I think I had a lot of chances and I was creating quite a few. Losing obviously sucks a bit,” said Raducanu.

“Coco is a great mover, great athlete. She puts another ball in play, so you feel like you have to squeeze it closer to the line and then she teases errors out of you.”

Teenager Gauff, who famously reached the Wimbledon last 16 as a 15-year-old in 2019, is among the favourites to win the title at Melbourne Park.

“I told myself to hang in there, Emma played really good tennis towards the end of the match,” said 18-year-old Gauff.

Raducanu can take pride and positivity from performance

Raducanu conceded it has been a “great achievement” even getting on to court at Melbourne Park this week following the ankle injury she sustained in Auckland 13 days ago.

Rolling the left ankle meant she had to retire from the match against Slovakia’s Viktoria Kuzmova, leaving Raducanu in tears when she left the court.

Before her opening match against Germany’s Tamara…