Adelaide International: Kubler charges into second round | 10 January, 2023 | All News | News and Features | News and Events 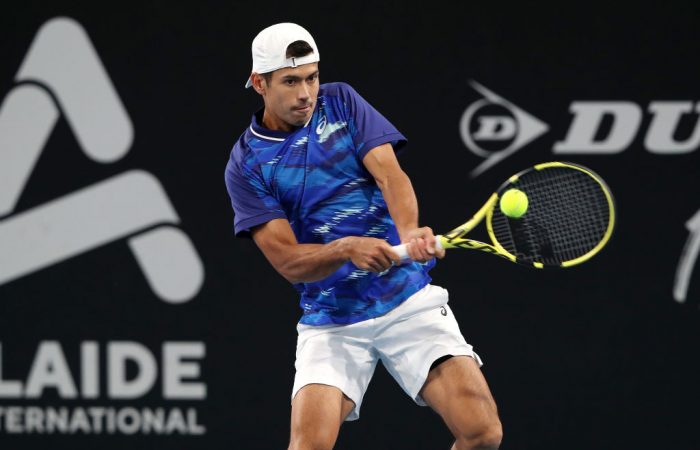 Jason Kubler continues his blazing start to the 2023 season, with his latest victory over Tomas Martin Etcheverry in Adelaide’s first round.

Jason Kubler has continued his impressive start to the 2023 season at the Adelaide International 2, with a straight-sets victory over higher-ranked Tomas Martin Etcheverry.

Kubler, a wildcard at the ATP 250 tournament, required two hours and 10 minutes to record a 7-6(2)  7-5 victory over the world No.80 from Argentina, setting a second-round contest with  No.6 seed Miomir Kecmanovic.

The Queenslander, who sits at a career-high world No.86 after wins over Dan Evans and Albert Ramos-Vinolas at the United Cup in Sydney, served with deadly efficiency over Etcheverry. recording 10 aces, only one double fault and saving all five break points that he faced.

“It was a tough one,” said Kubler, who was making his Centre Court debut at The Drive.

“I’ve never played on this court before, so at the beginning I actually found it quite tough to see, so returning the serve was quite difficult but then as the sun went down and we played under lights, it made it a little bit easier.”

The essence of tennis excellence runs in his veins! 👌

In a contest of the tightest margins between the evenly-matched combatants, the first set was decided in a tiebreak after neither player surrendered any edge on their serve.

“I honestly thought I served pretty well,” Kubler said.  “I was just trying to compete as hard as I could. He brought it tonight and I was trying to match him.”

Kubler did s0 superbly as he finally gained a service break late in the second set, and calmly served out the win.

It was a tougher evening in Adelaide for Australia’s Storm Sanders, who fell in two tight sets to Kaia Kanepi.