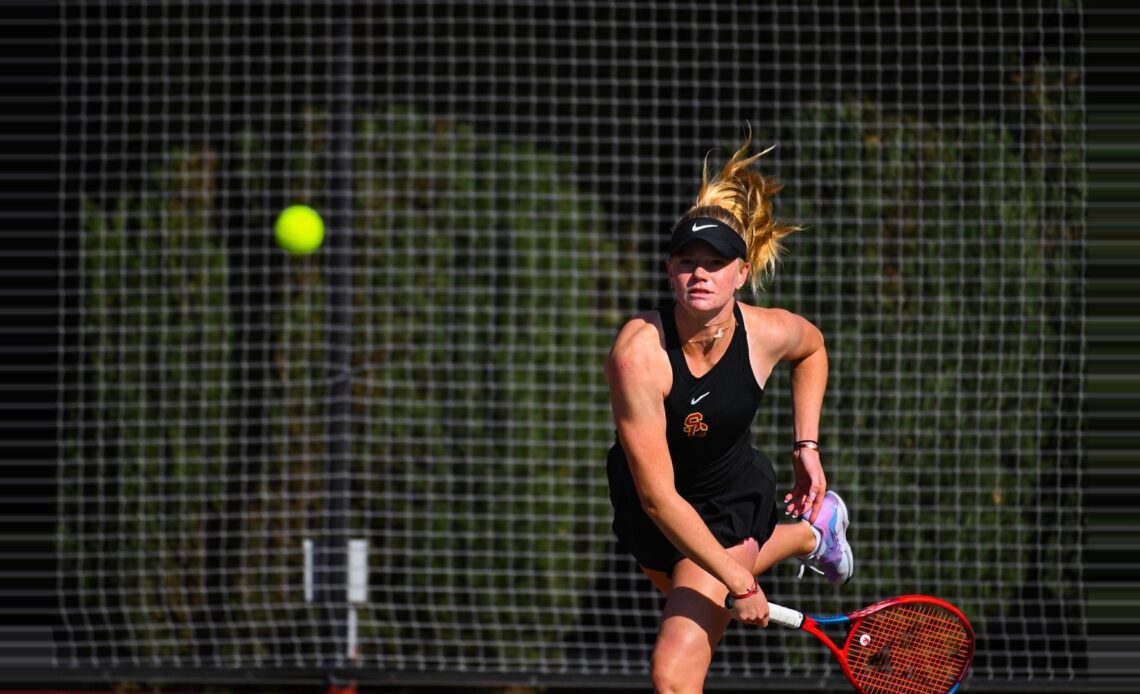 
The No. 14 USC women’s tennis team picked up another pair of wins on Saturday with back-to-back victories at Marks Stadium. In all, USC topped San Diego 4-3 and later returned to down San Diego State 6-1.

With today’s wins, the Trojans now sit at 4-0 on the season.

In doubles, the Trojan’s No. 20 ranked duo of Eryn Cayetano and Madison Sieg swiftly defeated USD’s Solymar Colling/Abigail Desiatnikov 6-0 on court two.  Over on court three, the Torrero duo of Claudia De Las Heras/Jordan McBride would defeat USC’s Grace Piper and Nathalie Rodilosso 6-4 to even the score and draw attention to court one. The doubles point was decided on center court as Snow Han and Naomi Cheong would rally to defeat USD’s No. 53 ranked duo of Kailey Evans/Elizabeth Goldsmith 7-6(7).

USC carried a one point advantage into singles play as No. 2 Madison Sieg would make her center court debut and notch the Trojans first singles win of the day with a swift 6-1, 6-1 victory over No. 29 Solymar Colling (USD). Senior No. 24 Eryn Cayetano followed closely behind with a 6-2, 6-4 win over USD’s Abigai Desiatnikov on court three. USD would battle back, notching wins on courts four and six before redshirt sophomore #17 Snow Han secured the victory for the Trojans with a 7-5, 4-6, 6-4 win on court two. The remaining match was played out on court five as USD’s Elizabeth Goldsmith defeated Trojan Grace Piper 7-6(8-6), 4-6, 7-6(7-5) to make the final score USC 4, USD 3.

After a brief 30-minute break the Women of Troy were back in action, this time with a tweaked doubles lineup versus the San Diego State Aztecs. USC’s Snow Han and Naomi Cheong would pick up their second win of the day, this time on court two as they defeated Aztecs Arnold/Azzziz 6-0. The Trojans lone ranked duo of #20 Eryn Cayetano and Maddy Sieg hauled in the doubles point with their 6-3 win over SDSU’s Detkovskay/Skrobonja. Action on court three was suspended with Nathalie Rodilosso/Grace Piper even with SDSU’s Melosch/Velcea at five games all.

Moving into singles play with a one-point lead, the Trojans got to work as No. 24 Eryn Cayetano and #83 Emma Charney would pick up two additional points for USC. The match was decided on center court as #2 Maddy Sieg notched her second singles win of the day with a…