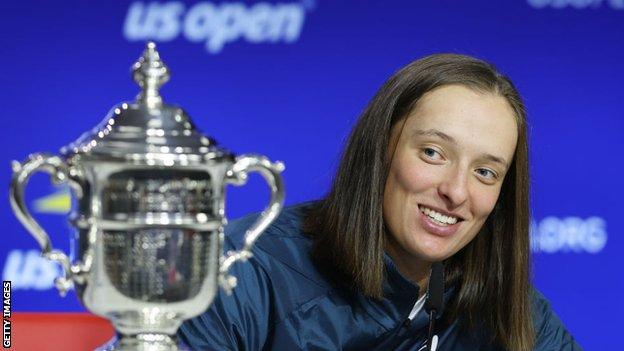 How do you follow up one of the most successful and dominant seasons on the WTA Tour in recent history?

Iga Swiatek plans to block out the outside noise and increased attention which comes with being the world number one and the woman to beat.

Or, as the 21-year-old from Poland put it more bluntly in a recent piece for The Players’ Tribune, remind herself not to “worry” about the opinions of others.

“When I don’t care about what people think and what their expectations of me are, it’s easier for me to succeed,” Swiatek told BBC Sport in Melbourne, where the top seed is preparing for next week’s Australian Open.

“Although I’m proud of them, I’m not going to try to match my previous achievements because it would not be constructive.

“A season like that is something amazing and rare. Sure, I would love to do it again but it’s not advantageous to live in the past.”

Last season started with Swiatek still doubting whether she could consistently challenge at the very top and aspiring to reach the level of then-world number one Ashleigh Barty.

Swiatek ended the year with two Grand Slam titles – the French Open and US Open – and a tight grip on the top ranking.

Reaching the semi-finals in Melbourne laid the platform for even greater things and when Barty surprisingly announced her retirement in March, little over a month after winning the Australian Open title, Swiatek was already emerging as the leading force on the WTA Tour.

With the Doha and Indian Wells titles already in the bag, Swiatek won her next four tournaments – Miami, Stuttgart, Rome and Roland Garros – as part of a 37-match winning streak.

The run, which ended on her least favourite surface of grass at Wimbledon, is the joint-longest winning streak on tour since 1990.

But with on-court success comes greater attention away from it.

As someone who describes herself as an introvert, Swiatek…