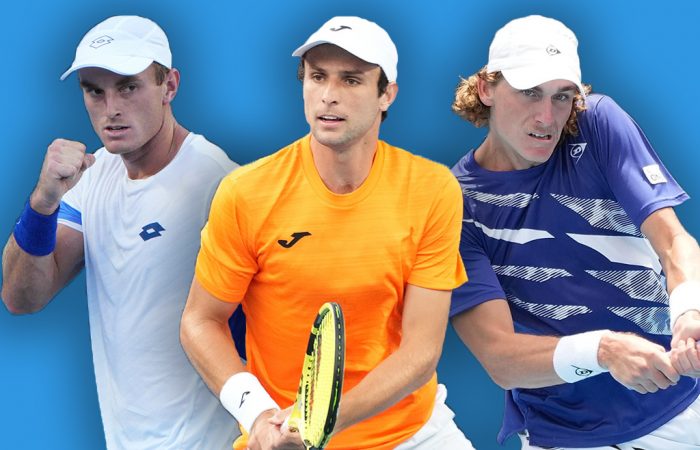 Tristan Schoolkate, Aleksandar Vukic and Max Purcell are among eight Aussie men to reach the second round in Australian Open 2023 qualifying.

Eight Australian men have progressed to the second round in the Australian Open qualifying competition, matching the best result by local hopes in the past 24 years.

The last time more than eight Aussie men reached this stage in an Australian Open qualifying draw was in 1998.

The experienced Max Purcell and Alex Bolt, who have successfully qualified before at this tournament, are leading the Aussie charge this week.

Adam Walton and Li Tu are enjoying career-best runs at their home Grand Slam, while Dane Sweeny, Marc Polmans, Aleksandar Vukic and Tristan Schoolkate are each hoping to qualify at Melbourne Park for the first time.

All are scheduled to play their second-round matches today.

Tickets to attend Australian Open qualifying are just $5 for kids and $10 for adults. Fans will also be able to see some of the world’s top-ranked players compete in practice matches at Melbourne Park.

Marc Polmans (AUS) v Marco Trungelliti (ARG)
Men’s qualifying singles, second round, Kia Arena, first match (from 10am AEDT)
Polmans, a 25-year-old from Melbourne, is determined to qualify at his home Grand Slam for the first time. “I really want to earn my spot,” he said after his first-round win yesterday. The world No.303, who is building strong momentum in his return from ankle surgery, faces the experienced Trungelliti. The 32-year-old from Argentina is ranked No.224 and has successfully qualified at the Australian Open on three previous occasions (in 2016, 2020 and 2022).
Head-to-head record: First meeting

Alex Bolt (AUS) v [22] Matteo Arnaldi (ITA)
Men’s qualifying singles, second round, Court 3, first match (from 10am AEDT)
Bolt has produced some of the best results of his career at Melbourne Park and is determined to add more. The 30-year-old South Australian, who missed six months with injury last year, vowed he was “feeling fresh and really hungry” after scoring an impressive first-round win on Monday. Bolt now faces a rising Italian in the second round. The 21-year-old Arnaldi is ranked No.134 and hoping to qualify at a Grand Slam for the first time.
Head-to-head record: First meeting