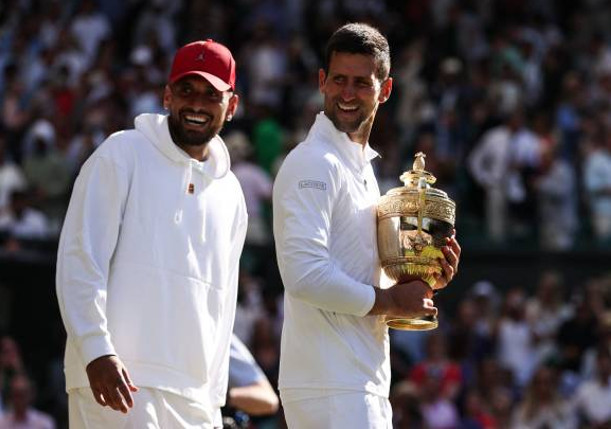 Nick Kyrgios has a message for critics claiming he’s bad for the sport.

Tell it to tennis fans flocking to his matches.

Kyrgios took criticism from some at home over skipping the Davis Cup Finals then withdrawing from United Cup shortly before the international mixed team competition began. The fact the Wimbledon final rematch of Djokovic vs. Kyrgios sold-out Laver Arena solidifies Kyrgios’ status as a massive draw for tennis.

Wow Nick Kyrgios is bad for the sport! Wow what a disgrace, a national embarrassment! How dare he sell out another stadium, the arrogance https://t.co/Sn37U2nAjv

Poking at his critics in a sarcastic social media post, Kyrgios tweeted: “Wow Nick Kyrgios is bad for the sport! Wow what a disgrace, a national embarrassment! How dare he sell out another stadium, the arrogance.”

Kyrgios replied to some pointing out 21-time Grand Slam champion Djokovic is a draw anywhere he plays.

Former ATP pro Noah Rubin questioned the timing of the charity exhibition days before the start of the Australian Open where Djokovic and Kyrgios could meet for real.

Kyrgios wasn’t having it replying to Rubin: “Well to be fair it will bring more crowd than any of your matches.”