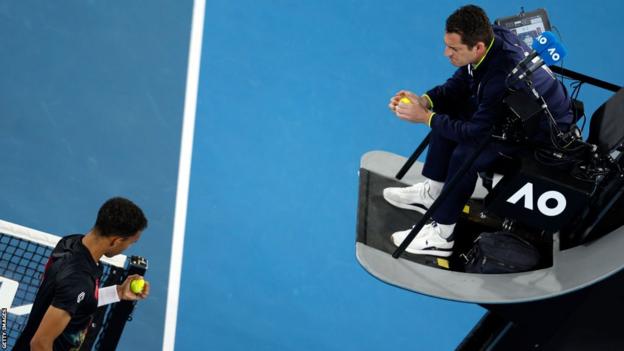 They’re too “fluffy”, they lose their “pop” and are generally slowing things down.

Players have been making their feelings known about the quality of tennis balls on offer at this year’s Australian Open – and the reviews have not been kind.

“The longer you play, the more rallies you play, the fluffier or the bigger the ball becomes and it’s slower,” record nine-time men’s champion Novak Djokovic said following his opening win over Roberto Carballes Baena.

“The outside courts are pretty quick. The stadium courts are a bit slower. But the ball is slower, so that affects the play,” Djokovic said.

“One of the biggest reasons will probably be the ball because on the big courts, I don’t think the speed of the surface has changed much.”

Speaking prior to the tournament, men’s record 22-time major winner Nadal said he had been told the balls were no different from previous years – but the Spaniard was not convinced.

“The ball is worse quality, without a doubt,” Nadal said.

“I think it’s a ball that doesn’t get the same spin as usual. After a couple of hits, the ball loses the pressure. It’s more difficult to hit with the right spin.”

The 22-year-old, who fought back from two sets down against Alex Molcan, spoke to the umpire about the state of the balls early in the third set.

“I don’t want to complain about it, but the balls are not bouncing,” Auger-Aliassime said. “I’ve never seen it before.”

The 2014 champion Stan Wawrinka, who lost in the first round against Molcan, echoed Nadal’s comments that something has changed.

“The balls are a bit different this year, it is true,” Wawrinka said.

“I have already tested them and it is true there is a big difference after you have used them for a few games than when they are new. They lose a lot of pop and it is completely different.”

If the criticism is accurate, imagine the state of…