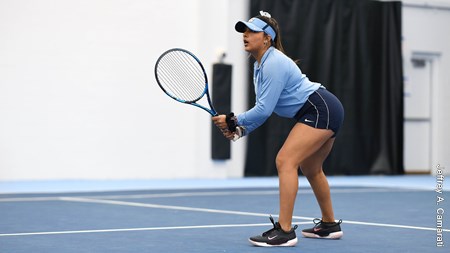 The 5-0 Tar Heels have only dropped three matches of the 35 the Tar Heels have played in the last week, having played five matches in six days at the Cone-Kenfield Tennis Center.

The Tar Heels, who have not dropped the doubles point this season, have had strong showings from the 12 doubles pairs the Tar Heels have used this season lead by the combination of transfer Abbey Forbes and freshman Reese Brantmeier at 2-0.

Senior Elizabeth Scotty leads the way with a 4-0 record in singles-duals this season, posting back-to-back 6-1 sets over NC Central. Brantmeier defeated Hill (NC Central), 6-1, 6-0, for the first clinching point of her collegiate career. Junior Reilly Tran, Senior Sophie Patel and Senior Fiona Crawley all are 3-0 in singles during the first five matches of the Dual season.

The Heels hit the road this weekend taking on Wisconsin, Saturday Jan 21 at 1 p.m. ET on the Auburn Campus. The Badgers are 1-0 to start the 2023 dual season, having defeated Marquette 6-1 this past week. Wisconsin took two of three doubles matches before rolling to wins in five of the six singles matches over the Eagles.

On Sunday Carolina will face No. 15 Auburn at 12 p.m. ET. The Tigers will open with the first dual match of the season on Friday vs Iowa State. Auburn is coming off of a 2022 NCAA Round of 16 appearance, finishing the season with a 22-6 overall record and setting the mark for the best SEC record in school history at 11-2. No. 43 ranked Ariana Arseneault went 18-6 singles dual match last season while No. 71 Carolyn Ansari went 20-6 in singles play.

Both matched will take place at the Auburn/Auburn University Yarbrough Tennis Center in Auburn, Ala.

Stay up to date on all of the news from UNC Women’s Tennis by following them on Twitter and Instagram.