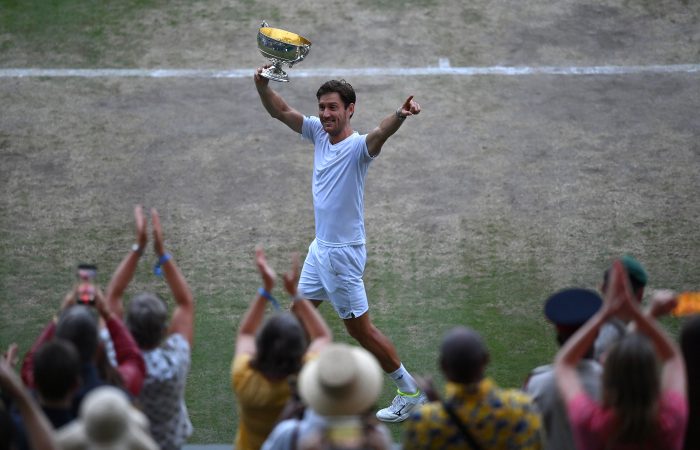 Matt Ebden enjoyed a memorable Wimbledon, becoming the first player to reach both the gentlemen’s doubles and mixed doubles final at the tournament in 16 years. The 34-year-old, who won the gentlemen’s doubles title alongside fellow Australian Max Purcell, reflects on his achievement, and shares an insight into their celebrations.

It’s still hard to truly reflect and digest that I am a Wimbledon champion. It feels very different to anything that’s ever happened to me before. Winning Wimbledon is the most humbling experience and feeling I’ve ever had. Of course, it feels incredible. There are so many amazing great feelings. But it really just feels so much more than that. I think when you win Wimbledon, it’s such a big thing and an iconic institution, that it’s not about you anymore or at all. It’s about the sport, it’s about Wimbledon, it’s about tennis and people coming together to celebrate.

As a team, Max and I have grown together a lot. Particularly in these last few months, but also since we started playing together at the US Open last year. We really believe in ourselves. It means even if we are down in a match, we still believe we can win. We know we have the ability and all the tools, so there’s no reason why we can’t come back – which we showed.

It was so special to celebrate our win with all the fans at Centre Court, sharing the moment as we did a victory lap with our trophies. Then, with all the people out the front of the steps. We also celebrated with the media and live to air with all our fellow Australians back home. We then had a chance to have some food and champagne with our teams and friends and family on the terrace at the All England Club, before heading up to the Dog & Fox in Wimbledon village to celebrate with all the locals and tennis fans. It was very fun and something I’ll never forget.

It was amazing to attend the Wimbledon Champion’s Ball too. I’ve said all along, to be a tiny part of the history of Australians winning at Wimbledon is…