Australian Open: Rafael Nadal says he is ‘vulnerable’ but ready to face Jack Draper in Melbourne 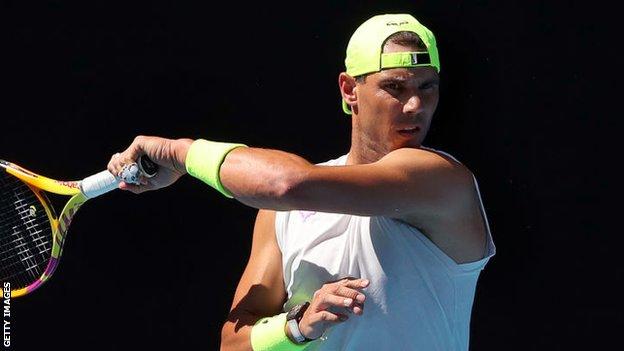 Top seed Rafael Nadal says he is vulnerable to losing against rising British star Jack Draper in the Australian Open first round.

Spain’s Nadal, the defending men’s champion, has lost six of his past seven matches, a run stretching back to last year’s US Open.

Draper, 21, has emerged as one of the tour’s hottest prospects and reached the Adelaide semi-finals this week.

“He is one of the toughest first-round opponents possible,” said Nadal, 36.

“He is young, powerful, growing very fast and playing well.”

Asked if he felt vulnerable going into Monday’s opening match, he added: “Yes, without a doubt. I have been losing more than usual, so that’s part of the business.”

Nadal won the Australian Open title last year, a few months after facing concerns that a foot injury might force him to retire.

Another major victory followed at the French Open – the tournament he has won 14 times – taking him to 22 Grand Slam titles and clear of long-time rivals Roger Federer and Novak Djokovic.

The Mallorcan left-hander played through Roland Garros with chronic foot pain and then withdrew from his Wimbledon semi-final against Nick Kyrgios with a torn abdominal muscle.

While he returned to play the US Open and reached the fourth round, Nadal has struggled to pick up many victories since.

The world number two, who is the top seed in Melbourne after Spanish teenager Carlos Alcaraz withdrew injured, has started the 2023 season with defeats by British number one Cameron Norrie and Australia’s Alex de Minaur at the United Cup.

“By the way, I didn’t play that bad in the first two matches the year. I lost against two great opponents, but having very positive chances to win both matches.

“I feel ready, honestly. The only thing that didn’t happen for me is victories.”

Draper is making his Australian Open debut, having climbed from outside the world’s top 250 into the top 40 in the past year.

The left-hander, who earned victories over top-10 opponents…