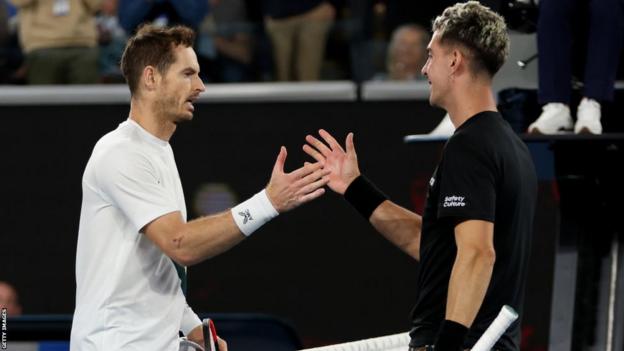 Andy Murray says finishing his second-round match at the Australian Open at 4am was a “farce”.

That followed Murray’s first-round victory on Tuesday, when the Briton sealed victory in four hours and 49 minutes against Italian Matteo Berrettini.

“I don’t know who it’s [the late finish] beneficial for,” said Murray at the Rod Laver Arena after the match.

“We come here after the match and that’s what the discussion is, rather than it being like, ‘epic Murray-Kokkinakis match’. It ends in a bit of a farce.

“Amazingly people stayed until the end, and I really appreciate people doing that and creating an atmosphere for us. Some people obviously need to work the following day and everything.”

He will face Spanish 24th seed Roberto Bautista Agut in the third round.

The rowdy fans inside the venue were treated to a fine spectacle from both players – despite it approaching the six-hour mark – but Murray also highlighted another problem with overly-long matches.

“If my child was a ball kid for a tournament and they’re coming home at five in the morning, as a parent, I’m snapping at that. It’s not beneficial for them,” said the three-time Slam winner.

“It’s not beneficial for the umpires, the officials. I don’t think it’s amazing for the fans. It’s not good for the players.”

The match start time of 22:20 was also an issue, according to Murray.

“We talk about it all the time, and it’s been spoken about for years,” said the Scot. “But when you start the night matches late and have [cold] conditions like that, these things are going to happen.”

Players can’t compete ‘into the wee hours of the morning’

Jamie Murray had to watch his younger brother’s frustration boil over on court as Andy asked why he and Kokkinakis were “still playing at 3am” after the Scot lost a point.