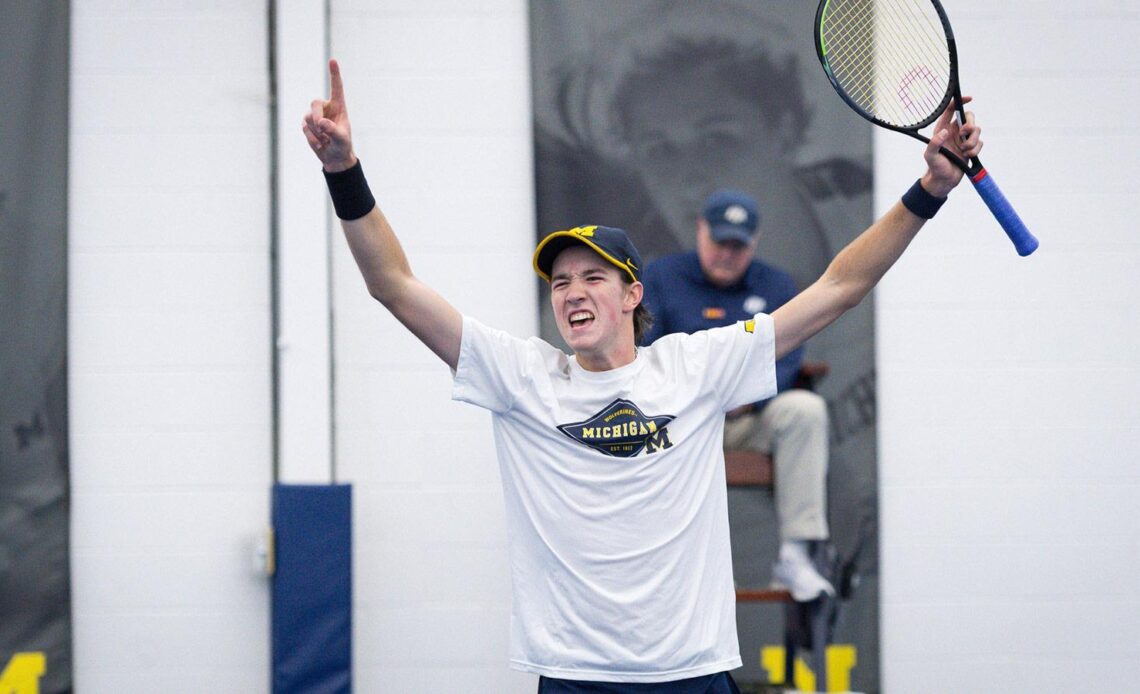 ANN ARBOR, Mich. — The No. 5-ranked University of Michigan men’s tennis team handed No. 6 Tennessee its first loss of the season, defeating the visiting Vols 4-1 von Thursday (Jan. 19) at the Varsity Tennis Center.

Andrew Fenty and Gavin Young battled their way to a 6-3 victory at No. 1 doubles, trading the first five points before winning three of the next four.

Patrick Maloney and Ondrej Styler also battled throughout their set at No.2 doubles, losing two of the first three points before winning three straights to take the match and doubles point with a 6-4 victory. Bjorn Swenson and Jacob Bickersteth were down 5-4 before the match was abandoned.

Maloney took the court at No. 1 singles and earned his first dual win this season. He and Shunsuke Mitsui went back and forth over the first five points of the set, with Maloney grabbing a 3-2 lead before taking another pair of points to extend the lead to 5-2. Mitsui got two points back, but Maloney came out victorious 6-4. In the second set, they split the first four points, but Maloney was able to hold off the challenge, taking three of the next four to win 6-3.

Styler improved to 6-2 in singles play as he won at No. 3, 7-6, 6-2 over Emile Hudd. Styler was locked in a battle with Hudd, trading all 12 points before Styler won the tiebreaker 7-5 to take the set. Styler used that momentum to caprture the first three games on route to a 6-2 victory.

Soon after, Tennessee got on the board after Andrew Fenty was unable to hold off Johannus Monday, falling 6-7, 4-6. Meanwhile, Young won his first match of the season to deliver the Wolverines the team match. He won the first two games against Blaise Bicknell before trading the next eight games to win the first set 6-4. He struggled in the second set, falling 6-2, but bounced back in the third. He went down one point early, but won six of the next seven games to secure the match.

Bickersteth was up 3-1 in the third set after splitting the first two 6-4 and 4-6, and Cooksey was…