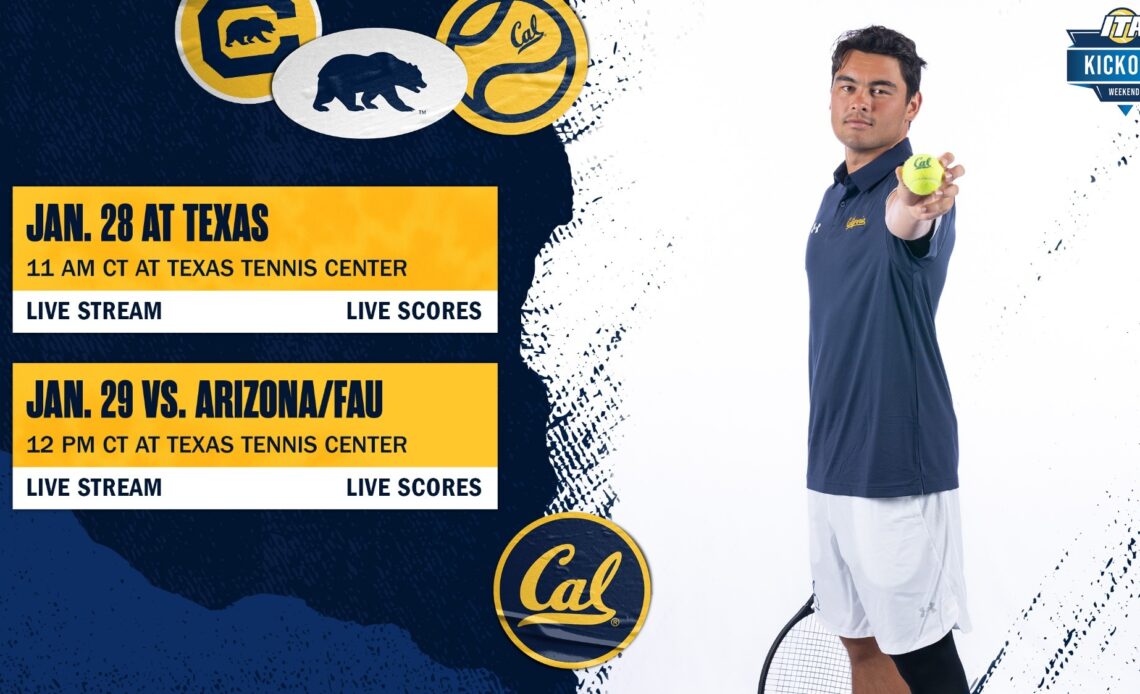 Philip Hjorth and the Bears battle No. 7 Texas in Austin on Saturday.


BERKELEY – The California men’s tennis team heads to the University of Texas this week to compete in the ITA Kickoff Weekend, with a berth in the ITA National Team Indoor Championship on the line. On Saturday at 11 am CT, the Golden Bears (2-1 record) will battle the seventh-ranked Longhorns (3-0) on UT’s North Courts, while 15th-ranked Arizona (2-0) plays and FAU (2-2) on the South Courts. On Sunday at 12 p.m. CT, Saturday’s two winners play each other on the North Courts for the right to advance to national indoors, slated for Feb. 17-20 in Chicago.

Fans can watch the Bears’ matches in Austin through the Texas live stream by clicking here and on Saturday can keep track of Cal’s live scores here. On Sunday, the live stream link stays the same, with the live scores link dependent on whether Cal plays on the North Courts or on the South Courts. The team’s Twitter @CalMensTennis will also provide regular updates.

Cal Beats Bay Area Rivals To Go 2-0 Last Week
Cal went 2-0 last week at home with a rout of Saint Mary’s followed by a big win in the Big Slam over 13th-ranked Stanford. Graduate student Yuta Kikuchi defeated Arthur Fery, 6-3, 2-6, 6-4, at court-one singles to clinch the Bears’ 4-3 victory over the Cardinal on Jan. 20. Siddhant Banthia and Carl Emil Overbeck clinched the doubles point with a 6-4 result over Fery and Neel Rajesh.

On Jan. 17 at the Hellman Tennis Complex, Overbeck secured a 7-0 rout of Saint Mary’s with a 6-2, 6-3 win over James Watt on court one. The Dane teamed with Banthia to clinch doubles against the Gaels, beating Watt and Mathis Moysan, 6-3.

Poll Position
In the latest ITA individual rankings, Ryder Jackson (12-7 record) is ranked 52nd in singles, while the duo of Yuta Kikuchi and Carl Emil Overbeck (4-0) is ranked 27th.