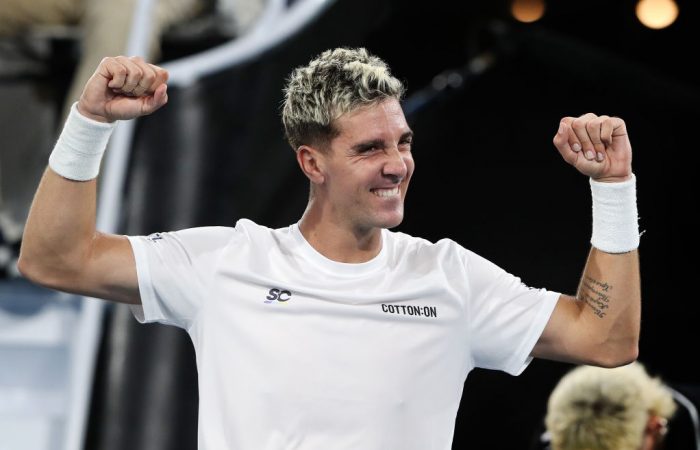 Thanasi Kokkinakis continues his giant-killing run in Adelaide, stunning No.1 seed Andrey Rublev to reach the quarterfinals for a second straight year.

Thanasi Kokkinakis’ giant-killing run at his home tournament in Adelaide continues, with the Australian stunning no.1 seed Andrey Rublev to move into the quarterfinals for a second straight year.

The South Australian local, who is defending champion of the Adelaide International 2 tournament, required just under two hours to claim his 6-4 3-6 6-3 win.

Victory over the world No.8 was a third top-10 win for Kokkinakis, and his first since March 2018 when he stunned then-world No.1 Roger Federer in Miami. “He’s a hell of a player, ” he commented of Rublev. “A ripper bloke as well.”

Kokkinakis was delighted to add to some life-changing memories on his home court in Adelaide, after winning his maiden ATP title at the tournament last year.

“I’ve had my best memories on this court, Last year was an incredible feeling. I think it’s something you only dream of as a kid,” Kokkinakis said.

“To play in front of (this crowd) in this atmosphere, every night, it’s incredible.”

The 26-year-old was imperious on serve against the accomplished Rublev, firing 17 aces, many unreturnable serves and recording only a single double fault.

“It’s a big part of my game,” Kokkinakis noted.  “If I’m serving well I feel like I have a chance to beat a lot of guys.”

The South Australian next faces Miomir Kecmanovic, who ended Jason Kubler’s perfect start to the 2023 season in three tight sets.

Following last week’s wins over Dan Evans and Albert Ramos-Vinolas at the United Cup in Sydney, the Queenslander was a first-round winner over Tomas Martin Etcheverry in Adelaide on Monday.

But after Kubler took the first set against Kecmanovic, the world No.29 from Serbia gradually edged ahead. After taking the second set in a tiebreak, he withstood a significant challenge from the world No.86 Australian.

The sixth-seeded Kecmanovic completed his two-hour, 33-minute victory when he broke the Kubler serve for the first and only time in the final game.

John Millman will turn his attention to a ninth…