This Is a Tough Moment 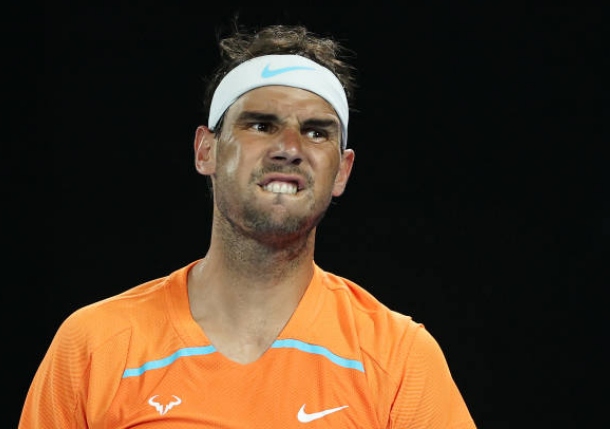 Playing the pain game is clearly taking a toll on the Grand Slam king.

It is Nadal’s earliest Grand Slam exit since he fell to Fernando Verdasco in the 2016 AO opening round.

The top-seeded Spaniard suffered a left hip injury chasing a ball in the eighth game of the second set.

A limping Nadal finished the match in discomfort and conceded afterward it’s difficult to draw positives from a painful departure.

“Can’t come here or can’t come here and say, lying, that the life is fantastic and staying positive and keep fighting,” Nadal told the media in Melbourne. “Not now. Tomorrow starts another day. Now it’s a tough moment. It’s a tough day, and you need to accept that, and keep going.

“You know, in the end, I can’t complain about my life at all. So just in terms of sports and in terms of injuries and tough moments, I mean, that’s another one. Just can’t say that I am not destroyed mentally at this time, because I will be lying.”

The second-ranked Nadal was taking pre-match cortisone shots to kill the pain in his foot during his inspired run to a record-extending 14th Roland Garros championship last summer. Nadal said he’s been bothered by left hip problems in the past.

“I have history in the hip that I had issues. I had to do treatments in the past, address a little,” Nadal said. “Was not this amount of problem. Now I feel I cannot move.

It’s the latest in a series of injury issues that have plagued Nadal, including a torn abdominal and ongoing foot pain, which his original coach, uncle Toni Nadal, has called his most challenging injury.

The two-time Australian Open champion said he’s human and is frustrated but knows injuries and the recovery process is part of his job.

“Of course it’s tiring and frustrating to be a lot of part of my tennis career on recovering process and trying to fight against all this stuff all the time,” Nadal said. “But I accept it quite well during all my tennis career,…