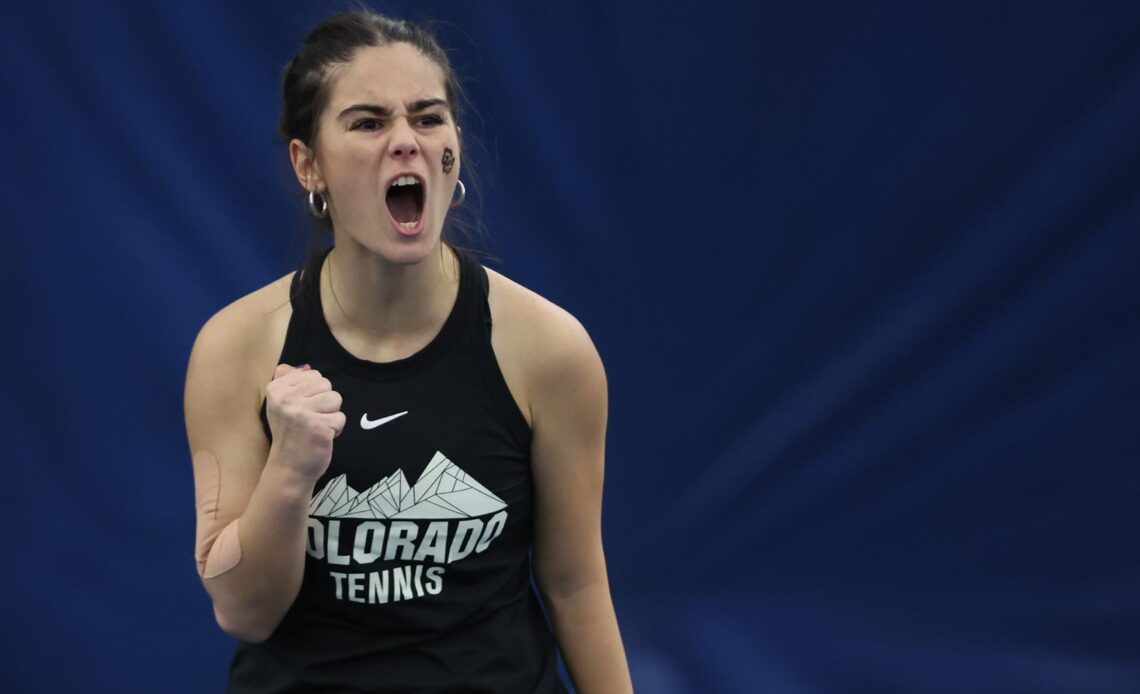 The Buffaloes got of to a fast start dominating the doubles matches, winning all three. At the No. 2 spot, Mila Stanojevic and Elys Ventura picked up the first doubles win 6-3. Shortly after the No. 1 doubles duo of Antonia Balzert and Aya El Sayed clinched the doubles point in a dominating 6-2 victory. Ellen Puzak and Betina Tokac finished it off winning 6-4 at No. 3 doubles.

The momentum carried through into singles play winning five of six singles matches. Ventura got the Buffs going with a commanding 7-5, 6-2 victory. What followed was the match of the day in the No. 1 singles with Balzert defeating Morett. After a slow start losing the first set 6-3, Balzert reset and followed that up with an emotional 6-4, 6-3 to finish off the match.

“I had to get back playing to singles matches,” Balzert said. “I felt good, I tried to play aggressive. I try to believe in myself, and trust that I can do it. It went better and better every set and I finished it off in third set.”

In the No. 3 singles Stanojevic dropped in a tough three set match. After dropping the first set 6-1, Stanojevic won the second set 7-5, but couldn’t close out the final set losing the last set in tiebreaker 7-6 and falling in the tiebreaker 7-1.

The Buffaloes finished strong, winning the next three matches, including the dominate clinching victory at No. 4 singles with El Sayed winning over Semenik 6-1, 6-2. Colorado’s fined off the afternoon with victories by No. 5 singles Tokac over Lolofie 6-2, 6-3 and Puzak defeating Ping An 4-6, 6-2, 10-6.

“Excited to get the season going.” Head Coach Anthony Pham said. “The ladies did a good job of fighting through some difficult moments and some rust and nerve,s but overall it was good. Our goal with them is to keep improving every day. We’ll be trying to clean some things up tomorrow and be ready to play against Air Force on Sunday.”

The Buffaloes will travel down to Colorado Springs on Sunday to take on the Air Force Falcons at 5:00 MST.

Senior Antonia Balzert on playing Air Force on Sunday – “It’s a super fun team environment. We have great team chemistry and playing air force is always interesting because they’re so close to us….