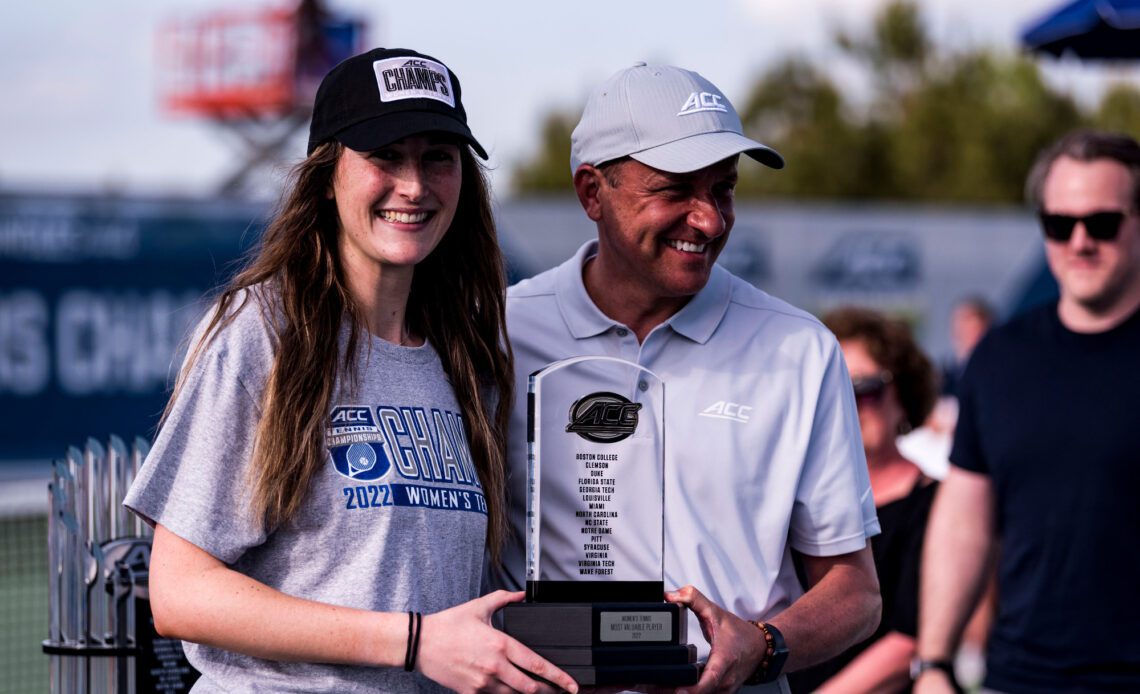 Georgia Drummy’s talent on the tennis court is undeniable. The player, who shepherded the Blue Devils to the 2022 ACC Championship, ended last season with an impressive eight-match winning streak. Her performance also merited the individual title of ACC Championship’s Most Valuable Player.

Her passion for tennis has clear roots; Drummy grew up surrounded by the game. You could say it’s a family affair.

“My parents actually met at a tennis tournament,” said Drummy. “We all have a passion for it.”

In addition to her parents, the Ireland native grew up playing alongside her two older sisters, both skilled players who furthered her exposure early on.

“They’re six years and four years older, so it was nice having them,” said Drummy. “Their level was always better than mine when I was younger, so I hit with them.”

Growing up, there was never a shortage of practice partners for the player.

“As I got older, l graduated from each person in the family to hit with,” said Drummy. “My dad was the best.”

Drummy’s father, Victor, was more than just her hitting partner – he was also her coach for years before she began training at the national training center.

“He has a real love for the sport,” said Drummy. Clearly, the grad student has inherited his passion for tennis.

Drummy began playing at the young age of four in her hometown of Dublin. By the time she was 12, she had decided to take it more seriously, traveling internationally and upping her game.

“In Ireland, the tennis level isn’t as amazing, so I had to start traveling from a young age within Europe to play tournaments,” said Drummy.

By the time she entered college, Drummy had already played in a number of large tournaments, including the Australian Open Juniors, Wimbledon Juniors, French Open Juniors, US Open Juniors, and even the Youth Olympics.

Drummy transferred to Duke following two seasons at Vanderbilt and made her Blue Devil debut in the fall of 2020.

As a result, Drummy was already well-accustomed to playing far away from home when she came to Duke. That’s not to say that the transition to collegiate tennis came without adjustments: for Drummy, one of the biggest changes was the team dynamic, which she lacked growing up.

“Because I’m from Ireland, there weren’t a lot of girls…