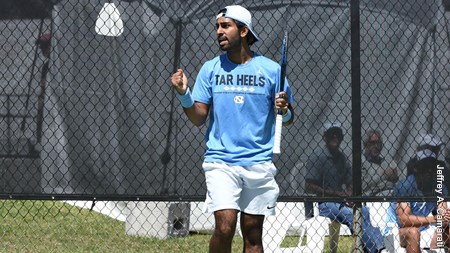 “We’re always excited about playing a really challenging schedule, and this year is no different,” Paul says. “The ACC continually is one of the top conferences in the nation and is filled with top-notch teams again this year. And our non-conference schedule is very challenging as well as we play some of the top teams in the country. It’s going to be a fun season.”

Six Atlantic Coast Conference teams earned spots in the ITA Preseason Top 25, including No. 1 Virginia, No. 14 Wake Forest, No. 16 (tie) Florida State, No. 18 Carolina, No. 19 NC State and No. 20 (tie) Duke. Four ranked non-conference opponents include No. 3 Texas Christian, No. 10 South Carolina and potential ITA Kickoff foes No. 16 (tie) Harvard and No. 22 Columbia.

Carolina will launch its season on January 14-16 at the Allen Morris Invitational at the Cone-Kenfield Tennis Center in Chapel Hill. After the warmup weekend, the dual match season will begin on January 19 with a doubleheader against Campbell and NC Central.

A road trip to South Carolina follows on January 22 before the Tar Heels host the ITA Kickoff Weekend on January 28-29. UNC will play Oklahoma State in Saturday’s semifinal and then meet either Harvard or Columbia on Sunday.

More stiff competition is up again the next weekend, with Illinois visiting Chapel Hill on February 4 and Texas Christian on February 5.

After a home match against Elon, the ITA National Team Indoor Championship will be in Chicago on February 17-20. Carolina is a two-time winner of the event.

The Tar Heels have released their 2023 spring schedule, and the action gets underway later this week!https://t.co/sZzEtj1xZZ#GoHeels pic.twitter.com/w6YZTrVOJB