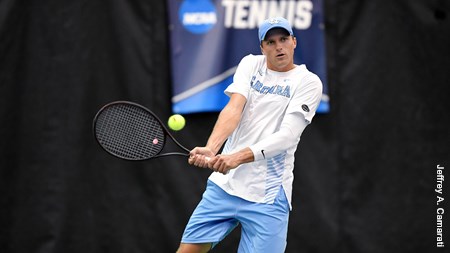 
CHAPEL HILL, N.C.—The University of North Carolina men’s tennis team is ranked No. 18 in the preseason national rankings released on Wednesday by the Intercollegiate Tennis Association.

In 2022, Carolina made its eighth consecutive appearance in the NCAA Tournament Sweet 16 and finished the season ranked No. 14 by the ITA. It was one of the highlight seasons in the rich history of Carolina tennis, one which includes plenty of success, especially recently.

The Tar Heels won eight of their final 10 matches to close the regular season, then advanced to the ACC Championship final for the second year in a row. Carolina won 12 of its last 16 matches overall and finished 18-9, including 9-3 in the Atlantic Coast Conference, on the season.

Karl Poling and Ryan Seggerman, both graduate students from Princeton University pursuing MBAs at the Kenan-Flagler School of Business in Chapel Hill, also have joined the Carolina team.

The ITA’s first set of singles and doubles rankings for the 2023 Spring season will be released on February 8.

The Tar Heels will kick off their 2023 action at the Allen Morris Invitational in Chapel Hill on January 14-16. Carolina’s first dual match of the year will come on January 19 at home against Campbell.