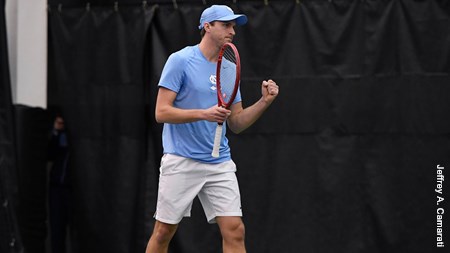 
The University of North Carolina men’s tennis team will play its first road match of the season on Sunday when it visits No. 9 South Carolina at noon in Columbia, S.C. Admission at the Carolina Indoor Tennis Center is free and open to the public with doors opening at 11 a.m.

UNC is ranked No. 18 in the most recent Intercollegiate Tennis Association rankings, while South Carolina is No. 9.

The Gamecocks feature the nation’s top-ranked doubles team of Connor Thomson and Toby Samuel, the duo that beat UNC’s Brian Cernoch and Ryan Seggerman in the final of the 2022 ITA All-American Doubles Championship in San Diego.

The Tar Heels started the season with a pair of 7-0 wins on Thursday at home against Campbell and North Carolina Central.