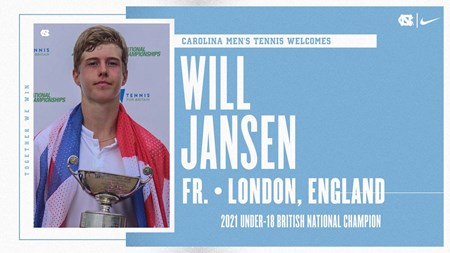 
CHAPEL HILL, N.C.—Will Jansen, one of the top junior players in Great Britain and Europe, has enrolled at the University of North Carolina and joined the men’s tennis team, head coach Sam Paul announced on Wednesday.

Jansen, the 2021 under-18 British national champion, was ranked No. 1 in the United Kingdom in his age group every year until 18 and under. He played in the 2022 Wimbledon Junior Championships as a wild card entry.

“We’re very excited to have Will join our team,” Tar Heel head coach Sam Paul says. “He’s one of the top junior players in Europe and the world, and he comes from a great family. He should help our team, and we’re glad he’s here.”

Jansen is a London native who is a graduate of the Reed’s School in his hometown. He enrolled at UNC for the start of the Spring semester as a freshman with four years of collegiate eligibility.