Get to Know American Katie Volynets 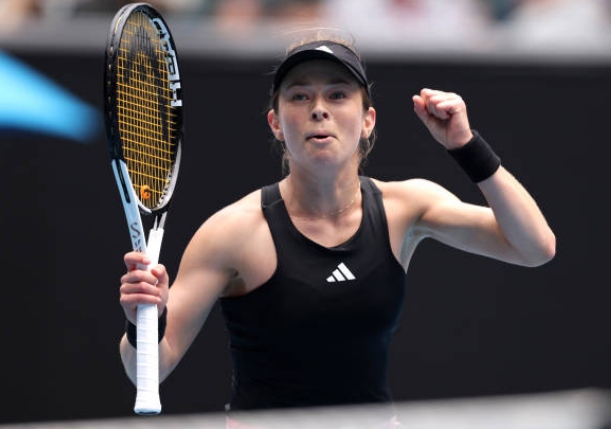 Veronika Kudermetova was reminded of a tennis truth down under: What you don’t know can hurt you.

Unheralded American qualifier Katie Volynets isn’t the biggest name in the Australian Open field, but she scored one of the biggest upsets today.

On her third match point, Volynets blocked a volley into the open court stunning the ninth-seeded Kudermetova 6-4, 2-6, 6-2 to score her biggest career win on Margaret Court Arena.

In her sixth career Grand Slam main draw, the 21-year-old Volynets reached a major third round for the first time.

“I’ve never played in a stadium this packed and that many people keeping the energy up for me.”

Start getting used to it, Katie Volynets 👏#AusOpen • #AO2023 pic.twitter.com/Ms5hLb00L0

We realize many of you, like some of us, may not know a lot about Katie Volynets.

Here’s a few facts about her to know more ahead of her third-round clash.

World No. 113 Volynets has attained a career milestone in Melbourne winning back-to-back Tour-level main-draw matches for the first time.

In round three, Volynets will face either Petra Martic or 23rd-seeded Shuai Zhang.

She is coached by German Henner Nehles.

Including qualifying, Volynets has scored five match wins in Melbourne Park. She wears adidas apparel and plays with Head racquets.

Volynets defeated world No. 9 Kudermetova in her first career match vs. a Top 10 opponent.

Prior to today’s win over Kudermetova, the highest-ranked opponent Volynets faced was No. 15 Bianca Andreescu at the 2019 US Open.

If you’re not familiar with Volynets’ style, she’s a quick-footed counterpuncher who redirects pace effectively and is an accurate ball striker. Volynets is not a particularly big hitter but plays smart combinations: She committed 28 unforced errors against Kudermetova, which was 19 fewer than the world No. 9.

The 21-year-old Volynets qualified for the ASB Classic in Auckland earlier this month where she lost to 42-year-old Venus Williams in the opening round….