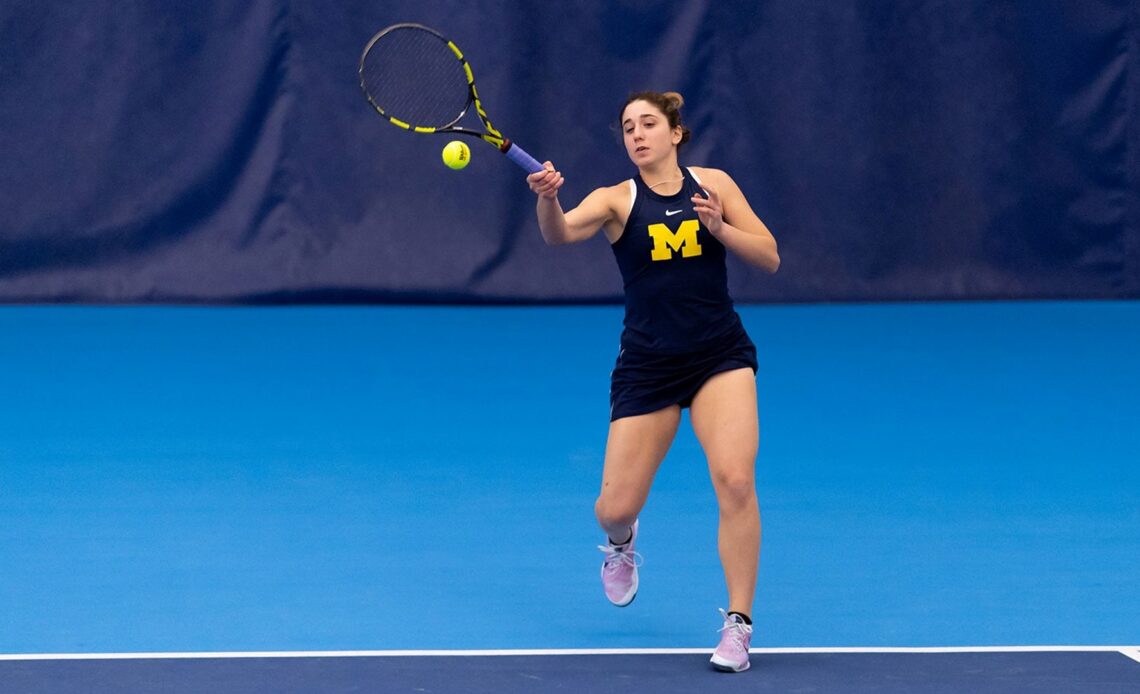 ANN ARBOR, Mich. — The No. 20-ranked University of Michigan women’s tennis team completed action at the three-day Michigan Invitational on Sunday afternoon (Jan. 15) at the Varsity Tennis Center, winning a doubles match against Ole Miss and four singles matches against No. 17 Ohio State.

Michigan took one doubles match from Ole Miss, coming courtesy of the No. 2-ranked pair of Jaedan Brown and Kari Miller. The match featured four breaks of serve over the first six games before settling in. Both teams held their serve over the next five games before U-M came through in the final game. After Brown held at 6-5, Ole Miss headed back to try to send it to a tiebreaker. Two straight double faults gave U-M three match points, with the Wolverines converting on the first one for a 7-5 win.

Michigan concluded the weekend with singles against OSU, taking four matches off the Buckeyes.

Andrea Cerdan completed a perfect 3-0 weekend in singles play with a 6-3, 6-4 win over Lucia Marzal. After cruising to a first-set win, Cerdan found herself in a 4-1 hole in the second. The veteran regrouped, ripping off five straight games to get the straight-set victory. Cerdan raced out to a 40-0 lead in the final game, cashing in on her second match point.

Bayley Sheinin grabbed a 6-3, 6-2 win over Dani Schoenly to finish with a 2-1 record on the weekend. Sheinin took early leads in both sets to earn her second win of the event.

Lily Jones, ranked No. 65, won 7-6(3), 6-3 over No. 116-ranked Kolie Allen to finish 3-0 in singles. Jones was down 5-3 in the first set but was able to win three of the next four games to send it to a tiebreaker. She raced out to a 5-1 lead in the breaker en route to the 7-3 win. In the second set, she broke Allen at 4-3 and consolidated the break in the ensuing game. She broke Allen again in the final game, winning the final four games in the victory.

Merri Kelly bounced back from a loss Saturday, rallying for a 4-5, 6-2, 6-2 triumph over Danielle Willson. After dropping the first set, Kelly grabbed an early break at 2-0 in the second, dropping just two games to force a third set. Kelly got the break she needed midway through the third,…