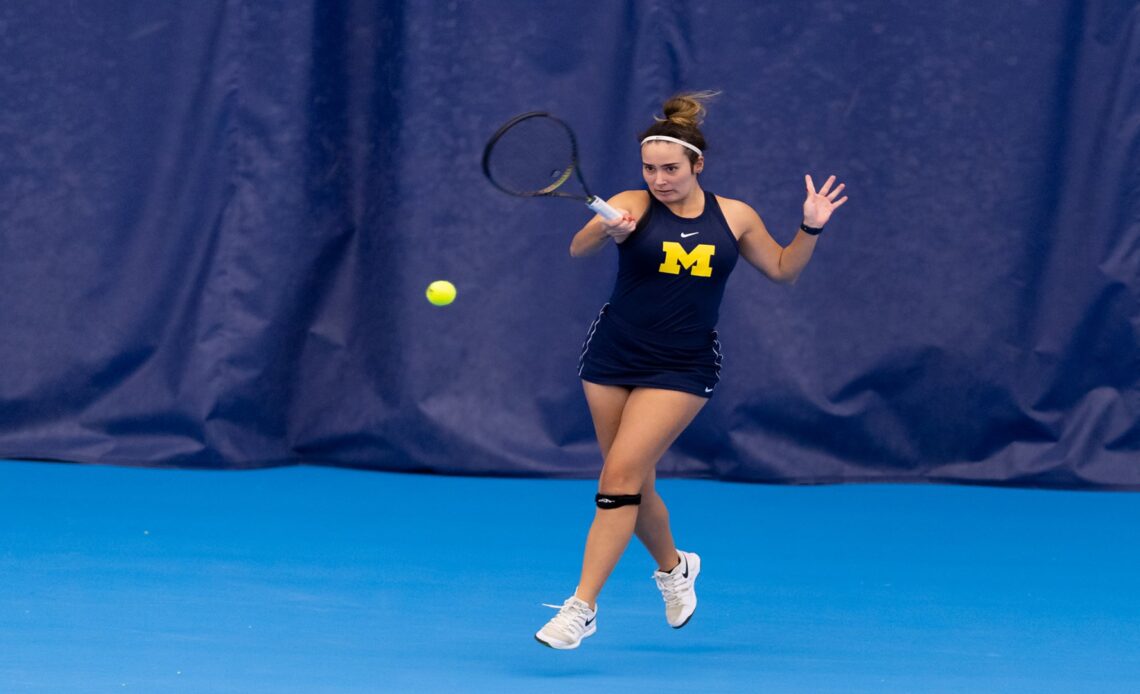 ANN ARBOR, Mich. — The No. 20-ranked University of Michigan women’s tennis team swept seven singles matches from Ole Miss and took two doubles matches from No. 24 Tennessee on the first day of action of the Michigan Invitational on Friday afternoon (Jan. 13) at the Varsity Tennis Center.

U-M started the day with a pair of doubles wins against the No. 24-ranked Volunteers, as the No. 2-ranekd duo of Kari Miller and Jaedan Brown wasted no time in their return to the court. The Wolverines pair raced out to a 4-0 lead and dropped just one game in a 6-1 victory over Rebeka Mertena and Esther Adeshina. Andrea Cerdan and Merri Kelly grabbed a 6-4 win of their own, weathering a 10-minute delay in the middle of the match. With the match tied 3-3, Tennessee needed an extended medical break to stop a bloody nose. It was all U-M out of the break as the Wolverines won three of the next four games to grab the match.

It was all Michigan in singles against Ole Miss, with U-M taking all seven matches — six in straight sets.

Two Wolverines picked up wins over ranked opponents, with No. 103-ranked Gala Mesochoritou getting a 6-3, 6-2 win over No. 89-ranked Lillian Gabrielsen. Mesochoritou jumped out to a 3-0 lead in the first set and did not look back in the 6-3 win. She started fast again in the second to get the victory.

Also victorious for the Wolverines on the first day of action were Brown, Kelly, Bayley Sheinin, Lily Jones and Cerdan.

The Wolverines continue the Michigan Invitational on Saturday (Jan. 14), facing off against the Rebels in doubles at 1 p.m. U-M will play Tennessee in singles to follow.