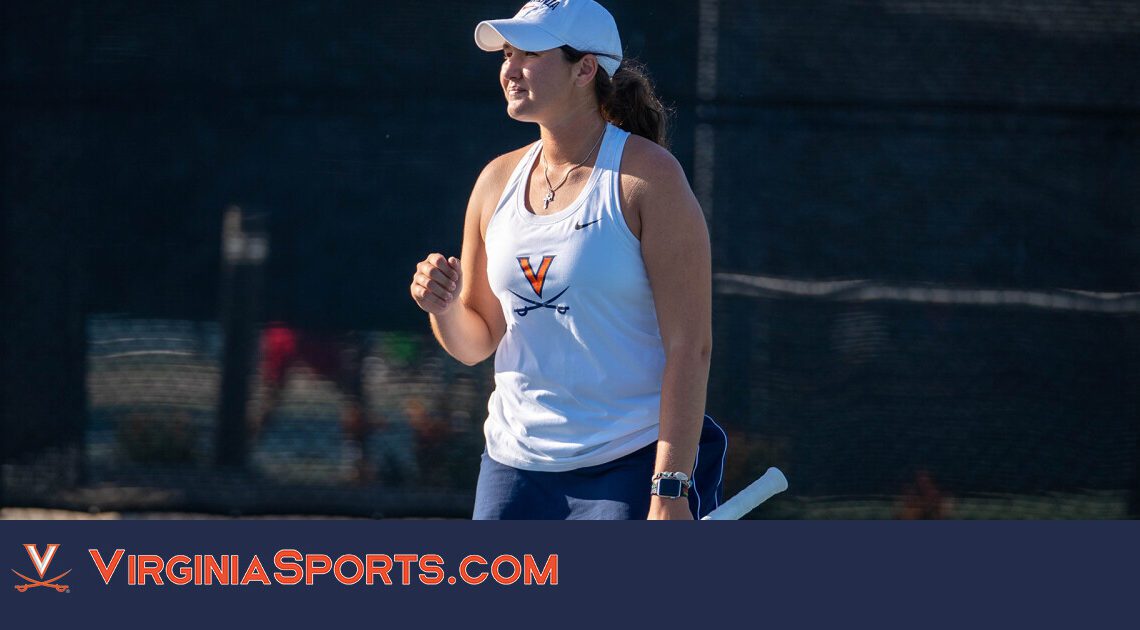 SAN DIEGO –  Three members of the Virginia women’s tennis team competed at the 2022 ITA National Fall Championships, being held November 2-6 at the Barnes Tennis Center in San Diego, California. The Championships are the grand finale to the fall collegiate tennis season and feature 64 of the nation’s top collegiate singles players (32 men and 32 women) and 64 of the nation’s top collegiate doubles teams (32 men’s teams and 32 women’s teams). The event is in its sixth year, having replaced the ITA National Indoor Intercollegiate Championships beginning in 2017.

Grad student Julia Adams and sophomore Elaine Chervinsky earned spots in the singles draw by virtue of being finalists at the ITA Atlantic Regional. Chervinsky and senior Natasha Subhash earned an at-large bid into the doubles draw and were the 5-8 seed, finishing as semifinalists.

Chervinsky and Subhash opened the doubles tournament with a 6-4, 6-1 victory against Maquet and Quiterio of Charlotte. They topped Anet Koskel and Zoey Weil of Minnesota 6-4, 6-1 in the Round of 16 before defeating Mary Brumfield and Selma Cadar of Maryland, 6-4, 6-4 to advance to the semifinals.  They fell 6-1, 6-2 against No. 2 seed, Fiona Crawley and Carson Tanguilig of UNC, on Saturday in the semifinals.

Chervinsky won her singles opener against Kimmi Hance of UCLA, 6-4, 6-3 and then advanced to the quarterfinals when her next opponent, the tournament’s 4-seed, Madison Sieg of USC, withdrew with an injury. She suffered a 6-2, 6-2 loss against Carol Lee of Georgia Tech in the quarterfinals.

Adams was edged 6-7 (3), 6-1, 7-5 by Carolina Gomez Alonso of Arkansas in Wednesday’s opening round. She dropped into the consolation bracket where  she faced Chloe Beck of Duke on Thursday, falling 6-2, 6-2 to end her run in the tournament.

The tournament wraps up the fall individual tennis season. Dual match play begins on Friday, Jan. 20 when the Cavaliers have a home doubleheader, hosting Richmond at noon and James Madison at 4 p.m.