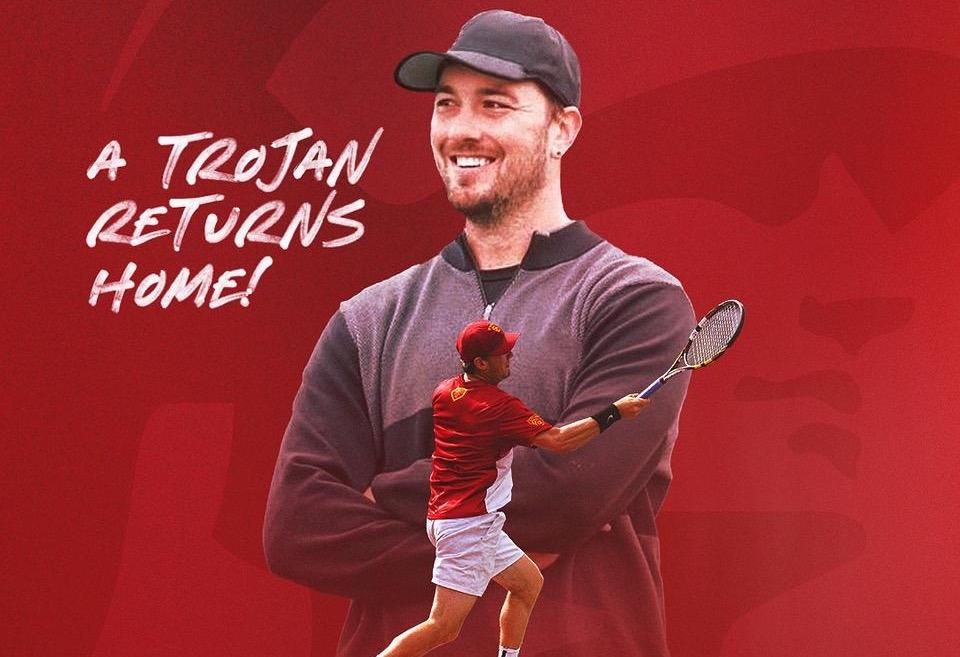 
USC men’s tennis head coach Brett Masi has brought Eric Johnson back to his alma mater to serve as his assistant coach. Johnson returns home ahead of the Trojans 2023 campaign.

“Having someone that’s played here at USC and won national titles is very valuable. He can speak from experience, enlighten the team and share his knowledge with the program which is something extremely special,” said Masi of his new hire. “EJ cared for this program so much as a student athlete and when I told him he was coming home, he was beaming ear to ear. Being able to now get to coach the team he once played for, I know he’ll do everything in his power to help bring a trophy to this program like he did as a player.”

“It’s a dream come true to return to my Trojan family and work with Coach Masi,” Johnson said of joining the Trojans. “The athletic tradition at USC is unlike anywhere else – it’s supported by an administration and community that is deeply committed to student athlete welfare and winning. I want to thank Coach Masi and the administration for this incredible opportunity. I’m eager to get started with the team and begin working together to bring more national championships to USC.”

Prior to joining the collegiate coaching ranks, Johnson wrapped up a successful run on the ATP tour, winning tournaments in both Israel and Greece. At his best, he held an ATP ranking of 507.

While at USC, Johnson contributed to three national championship-winning teams. In 2014, Johnson was named to the NCAA All-Tournament Team after going undefeated in singles play to help the Trojans claim the 2014 NCAA Championship. During his senior year, Johnson was team captain and played in the No. 1 slots in singles and doubles. As a Trojan, EJ was a two-time ITA Southwest Regional Doubles Champion, playing with Max de Vroome (2013) and Yannick Hanfmann (2014).