Thomas Gadecki steps into the spotlight at Australian Open 2023 | 21 January, 2023 | All News | News and Features | News and Events 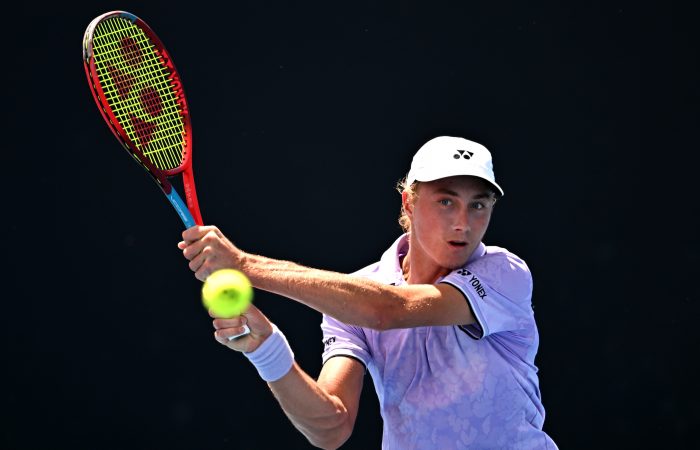 Watching one of your children debut at a Grand Slam would be a thrill for any parent – but imagine if it happened twice?

That incredible scenario was experienced by the Gadecki family in an unforgettable week at Melbourne Park.

Last Monday, Olivia Gadecki embraced her mother Natalia court side after winning her first main-draw match at Australian Open 2023. Today, her younger brother Thomas made his debut in the boys’ singles in front of a big local crowd.

The 16-year-old Thomas Gadecki scored a wildcard into the boys’ singles draw after winning the 16/u National Championships at the December Showdown last month and he continues to pinch himself about a whirlwind six weeks.

“It’s crazy! The last six weeks have been so rewarding for me,”  said Gadecki, who exited to top seed Kilian Feldbausch of Switzerland.

“All the hard work over the years is to get these opportunities so it’s good that it’s paying off.”

Gadecki’s debut comes in the wake of big sister Olivia’s historic first main-draw victory, when she defeated Polina Kudermetova in the opening round.

“It was the perfect first day for her. It was incredible fun to watch her win and it really gave me a lift.

“I stayed up late to watch her second match and probably missed some practice because of it.” Gadecki said with a laugh.

As Thomas took the court for his match with Feldbasuch, his sister was playing doubles alongside Priscilla Hon.

It created a difficult question that many parents would relate to – who do you watch?

“Mum chose me today. It’s my first Grand Slam match so I finally won the battle on that one,” Thomas said.

After facing the top seed, Gadecki is confident he has what it takes to make the next step.

“I think I can compete with these guys, and I proved that as the match went on. I had my chances, and I can learn from all of that,” he added.

Thomas is looking forward to a big year on tour and feels the sky is the limit.

“I plan to go overseas and travel the circuit which will be awesome. Hopefully with some big results,” he said.