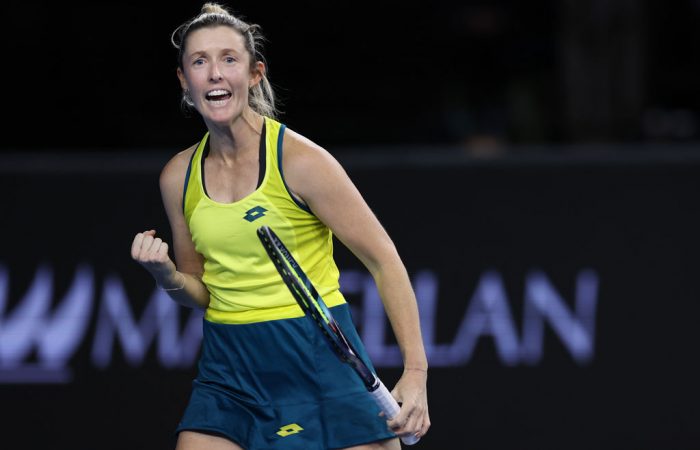 Inspired to take up tennis after watching Andre Agassi compete at the Australian Open, Storm Hunter is preparing to contest the main draw of her home Grand Slam for a fifth time.

A Grand Slam title, a wedding, and a wildcard into the Australian Open main draw. That’s not a bad six months for Storm Hunter.

But the journey, and the foundations of that success, started long ago for the 28-year-old from Rockhampton.

Hunter fell in love with the sport as a six-year-old after watching the Australian Open on television.

“My idol growing up was Andre Agassi,” she said. “I first started to play tennis because he was playing one of the first matches I ever watched and after watching him on TV I just wanted to be a pro tennis player.”

The lefthander debuted at professional level in 2008 shortly after her 14th birthday and claimed a maiden title as a teenager in 2013.

That impressive early development came on top of having to juggle a family move from Queensland to Western Australia as a child and balancing her education while competing on the ITF Tour.

Hunter made her first main draw singles Grand Slam appearance at Australian Open 2014, returning in 2015 and 2016.

She made doubles her primary focus in early 2017, taking a maiden title in Nottingham followed by two more finals before the end of the year.

But a major injury setback halted her progress in 2018.

“I started getting some shoulder pain, which got more intense,” she explained.

“I played the Aussie Open that year just focusing on doubles, but after that I stopped playing completely and was basically out for all of 2018.”

Following that injury, Hunter won an ITF singles tournament in only her second tournament back (the Playford International in South Australia) and took another doubles title in Thailand in early 2020.

In the last two years, her doubles career has taken off, and her singles game is also reaping rewards.

She reached a career-high singles ranking of world No.119 in the past 18 months, qualified for her first Grand Slam main draw in singles outside Australia (Roland Garros in 2021), and currently sits inside the world top 10 in doubles.

But it is within a team environment where Hunter has shone brightest.

At the 2021 Billie Jean King Cup Finals, she produced the win of her career to date with victory over world No.18…