Someone Help Me Fix this F–king Serve! 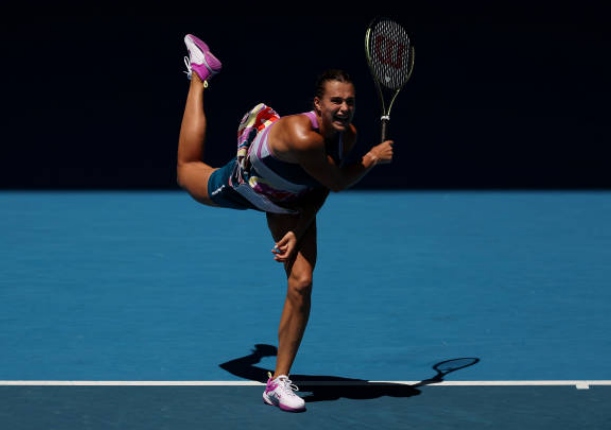 Tuning up her once volatile serve has helped Aryna Sabalenka orchestrate her best Australian Open run.

A cry for help from Sabalenka last summer was the start of refining her serving biomechanics.

Last year, Sabalenka struggled with a serve that was a mess at times. Clean-up time came last summer.

After clanking more than 300 double faults in her first 37 matches last season, Sabalenka grew so frustrated she recalls her primal plea for assistance: “someone help me fix this f–king serve.”

“Before I wouldn’t be really open for that. I would be like, You know what, my serve is fine, I don’t want to change anything,” Sabalenka said. “Actually, even when my serve was working, it wasn’t really right. I’m super happy that it’s happened to me. I was, like, in that moment open for whatever.

“I was just like, Please, someone help me to fix this f–king serve. I’m sorry for swearing, but this is how it was. This is the true feeling. Yeah, I learnt a lot, a lot new stuff about my serve.”

She’s showing it down under. Sabalenka raised her 2023 record to 8-0, sweeping all 16 sets she’s played.

Through four AO victories, Sabalenka is winning 79 percent of her first-serve points, which is second women still competing behind Wimbledon winner Elena Rybakina (82 percent). Sabalenka has hit 14 aces against 11 double faults in her four AO wins.

A primary lesson Sabalenka learned was that her disease of double faults and unruly yips was not mental, as she initially thought, but biomechanical.

Working with a biomechanics coach, Sabalenka said she’s smoothed her service motion and is using her bigger muscles more effectively. Sabalenka has also seemed to tame her toss.

“I’ve done a lot. I worked so hard,” Sabalenka said. “Even when my serve was—ow did you say—’disaster’? I worked a lot on my serve. I was keep trying, keep believing, keep changing. Then I worked on my, like, biomechanic.

“Basically that’s it. But I was doing everything. I thought it’s mentally, but it wasn’t. We changed a lot of things on how we work on my serve. We tried to work more, less. We tried to, I don’t know, so many different things. In the end of the season when I start…