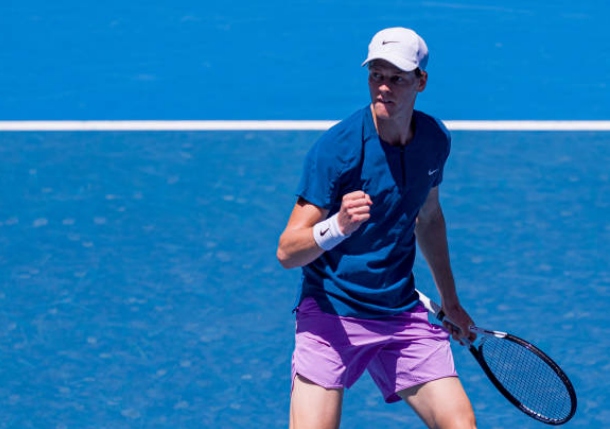 Staring down a two-set deficit to buddy and practice partner Marton Fucsovics, Sinner elevated soaring through 18 of the last 21 games.

Sinner successfully rallied from two-sets down for the first time in his life fending off Fucsovics 4-6, 4-6, 6-1, 6-2, 6-0 to land in the Australian Open fourth round for the second straight year.

Once a gangly young player, Sinner showed the results of rigorous offseason training as he looked fresher and fitter against Fucsovics, who has a well-earned reputation as one of the strongest men on tour.

“For sure the first two sets were very tough for me,” Sinner said in in his on-court interview. “Thanks so much for the support without you it was quite impossible so thanks so much.

“Obviously, I had to change something in my game after the two sets. I was feeling the ball quite well, but the final shots I was missing. Obviously, we made a lot of work in the offseason especially physically and today I was good physically in the last sets.”

Down a break at 0-2 in the fourth set, Sinner was slashing his baseline drives with conviction as he rolled through 12 consecutive games to close in three hours, 33 minutes.

World No. 16 Sinner will face third-seeded Stefanos Tsitsipas for the second straight year in Melbourne.

The highest-seeded man still standing in the AO field, Tsitsipas defeated Tallon Griekspoor 6-2, 7-6(5), 6-3. Tsitsipas has won four of five meetings vs. Sinner with three meetings coming on the red clay of Rome.