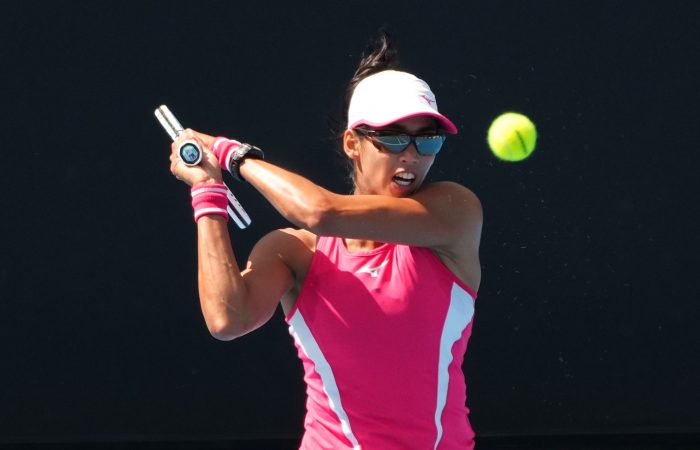 Astra Sharma has progressed to the second round of Australian Open 2023 qualifying after scoring a hard-fought win over Germany’s Katharina Hobgarski.

“I’ve actually been working on closing out, ironically,” said the 27-year-old Australian wildcard.

“At the end of the day I’ve been working on treating every single point the same. If you don’t close out this set, just look for the next opportunity. Treat 5-3 as if it’s 2-all. Every point is the same and try not to make a big deal of one in particular, even if it has match point attached to it.”

World No.224 Sharma spoke about the need to adjust mid-match to the tempo and was proud of her ability to get back on top.

“She hits a tricky ball. I kept expecting them to drift out but they’d always land in. I had to adjust to the flatter balls she was hitting, and I used the change over before the third set to fire back up again,” she said.

Sharma is eyeing off a fifth straight Australian Open main-draw appearance and feels as if she is in a good place.

“I’ve had a really good pre-season. I played the first lead-up tournament really well I thought, but just didn’t have much luck,” she said.

“I’m keen to build through qualifying and hopefully land in the draw next week.”

In the other evening result, Alexandra Bozovic put up a gallant showing against No.1 seed Alycia Parks of America. The 23-year-old Australian went down in a pair of tiebreaks.

Tickets to attend Australian Open 2023 qualifying are just $5 for kids and $10 for adults. Fans will also be able to see some of the world’s top-ranked players compete in practice matches at Melbourne Park.