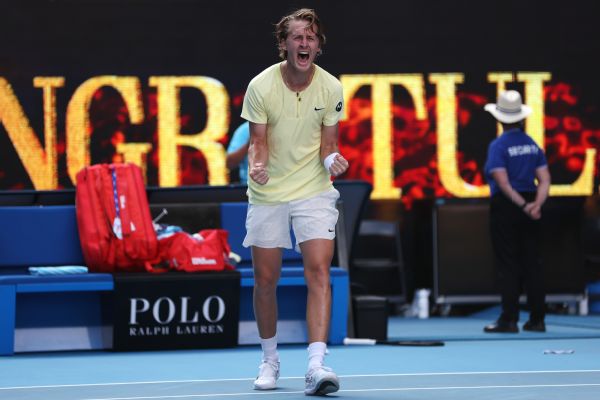 This was not a smooth ride for Sebastian Korda at the Australian Open on Sunday. An early deficit against a higher-seeded opponent. Some so-so serving. An up-and-down fifth-set tiebreaker filled with mistakes by both players.

“Just tried to stay as calm as I possibly could,” said Korda, whose father, Petr, won the 1998 championship in Australia. “I’m very happy with the way I just stayed down, kept going through it, and the outcome was great.”

The younger Korda has made it a point to reach out and tap signs marking the titles won by his father and by mentor Andre Agassi in the hallway leading to the court in Rod Laver Arena.

“Every single time I walk by, I always give … a little fist bump,” Korda said. “Kind of makes me feel like they’re with me, in a way. I always know that they’re watching. They’re both very special for me. They helped me a ton.”

Korda’s mother was a professional tennis player too, and his two older sisters play professional golf. They have been following the guy they call “Sebi” via TV from the United States during the Australian Open, despite the 16-hour time difference between the East Coast and Melbourne.

This victory followed up a third-round win for Korda against 2021 US Open champion Daniil Medvedev, the runner-up at Melbourne Park each of the past two years.

The 29th-seeded Korda will face 18th-seeded Karen Khachanov for a spot in the semifinals.

Korda was one of four American men to get to the fourth round, along with Ben Shelton, J.J. Wolf and Tommy Paul, the most for the country in Australia since four, including Agassi, made it in 2004.

“It’s awesome,” Korda said. “We’ve got a great group coming up. I think we can do some special things in the next couple years.”

Khachanov, who was a semifinalist at last year’s US Open, eliminated Yoshihito Nishioka 6-0, 6-0, 7-6 (4) earlier Sunday.

Korda vs. Hurkacz came down to the first-to-10, win-by-2 tiebreaker now used at all major tournaments in the fifth sets of men’s matches and third sets of women’s. Both players appeared to be tight, neither was able to muster much in the way of winners, and the scoreline swings were as wild as can be.

Hurkacz, whose victory over Roger Federer at Wimbledon in 2021 was the 20-time Grand Slam champion’s final singles match, went ahead 3-1. Then Korda took six…